With the trade deadline now less than two weeks away, we will be taking a closer look at the situation for each team over the coming weeks.  Where do they stand, what do they need to do, and what assets do they have to fill those needs?  Next up is a look at the New York Islanders.

The New York Islanders have posted almost exactly the same numbers that they had at this point a year ago. However, the difference this year that the competition in the Eastern Conference is quite a bit more challenging and leaves the Islanders barely holding onto a playoff spot at the moment. However, perhaps the most challenging issue facing the Islanders was the injury to defenseman Adam Pelech. The blueliner never got much attention when healthy, but the top-pairing defenseman is being sorely missed and with Barry Trotz’ lack of faith in rookie Noah Dobson, the other five defenseman have been assuming extra minutes to fill in for Pelech, suggesting the team needs to add some help at that position in the next few days.

With the team looking to make an impact in the playoffs, it’s unlikely that general manager Lou Lamoriello would consider moving any of his pending unrestricted free agents, which include forwards Matt Martin, Derick Brassard, Tom Kuhnhackl and goaltender Thomas Greiss. That doesn’t leave too many trade chips for the veteran GM to play with.

The team does have all of its draft picks for the next two years and might be willing to move a first or second-rounder to get a deal done and bring over some needed depth. Another key asset is the team’s cap space. They have more than $28MM in cap space, if they need it, and could use that to take on a significant contract from a cap-starved team for a price. 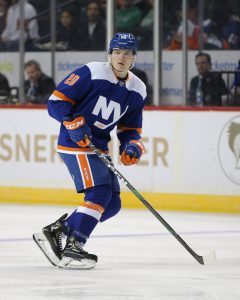 The team also has a large number of prospects coming up the system with many of them already in the AHL. While it’s unlikely that the team moves a top prospect, Trotz as well as Lamoriello, are well known for preferring veterans, which means they might not mind moving a prospect for a significant piece now and with the challenges of recruiting free agents to Long Island, they may have to include a young piece to acquire a player with term. A player like Kieffer Bellows, who was brought up recently likely to showcase his talents, could be an option if the price is right.

Another option would be finding a partner for embattled forward Joshua Ho-Sang. After demanding a trade and sitting out for two and a half months, the 24-year-old forward has played well since returning to the AHL Bridgeport Sound Tigers, scoring two goals and eight points in 12 games. Teams weren’t interested in H0-Sang when the team placed him on waivers, due to his well-known attitude issues, but a team might be willing to take a chance on him now just to see what he has left.

1) Veteran defense: With Pelech out and Dobson struggling in his rookie campaign, the Islanders are in desperate need of some veteran depth on their blueline and are extremely likely to add to that position before the trade deadline. While there are quite a few options available to Lamoriello, there are some obvious options, including a player that he is familiar with in Ottawa defenseman Ron Hainsey. With a group of young blueliners ready to step into their NHL lineup, Ottawa may be ready to move Hainsey.

2) Upgrade To Top-Six: While the team is well known for its defense, the Islanders could use an upgrade to their offense. New York has six solid players there, but adding some offense could allow the team to move some of those players to the third line, which hasn’t been that effective this season with the exception of Brassard. Again Lamoriello is quite familiar with Ilya Kovalchuk, who Montreal is considering moving, which might be a perfect fit with the Islanders. The team may also want to bring in a quality top-six player with term left who can be a significant long-term upgrade as well.