The Pittsburgh Penguins have finally landed their man. The Penguins have acquired Jason Zucker from the Minnesota Wild in exchange for Alex Galchenyuk, Calen Addison and a conditional 2020 first-round pick. Should the Penguins miss the playoffs this season, they will have the option to instead give the Wild their 2021 first-round selection. 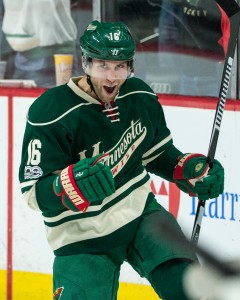 Zucker, 28, has been a target of Penguins’ GM Jim Rutherford for some time. Last summer there was a deal agreed upon between the two teams that would have sent Phil Kessel to Minnesota, but the enigmatic sniper refused to waive his no-trade clause. Kessel was eventually dealt to the Arizona Coyotes instead with Galchenyuk a big part of the return. Zucker is signed through 2022-23 at a $5.5MM cap hit, giving the team a lot more cost certainty than Galchenyuk, who is a pending unrestricted free agent.

The last several years have been quite the rollercoaster for Galchenyuk. The third overall pick in 2012 scored a career-high 30 goals in 2015-16 with the Montreal Canadiens but will now join his fourth organization in three seasons. Despite coming in to potentially replace Kessel in the Pittsburgh top-six, the 25-year old couldn’t find a fit beside Sidney Crosby or Evgeni Malkin and was dropped down in the lineup. With just five goals and 17 points in 45 games it has been a disaster for him, especially given he’ll be negotiating a new deal in a few months.

Though Zucker and Galchenyuk will fill most of the headlines, Addison isn’t to be overlooked. The 19-year old defenseman is the real gem in the deal for the Wild, who are trying to add more prospect talent to the organization. Selected 53rd overall in 2018, the puck-moving blueliner has 43 points in 39 games for the Lethbridge Hurricanes and was one of the best players for the gold medal-winning Team Canada at the World Juniors. McKenzie tweets that the Penguins didn’t want to include Addison in the deal, but given Wild GM Bill Guerin’s familiarity with the Pittsburgh organization it’s not surprising that he was a target.

The fact that the Wild will also add a first-round selection makes this quite the package, especially if they can either re-sign or flip Galchenyuk for even more. Zucker does appear to be a perfect fit for the Penguins however, especially given Jake Guentzel’s long-term injury.

Not only is capable of creating plenty of offense—he currently sits at 14 goals, 29 points through 45 games—he also brings the one attribute that has worked so well in the past alongside Crosby: speed. Zucker is still one of the best straight line skaters in the league and will give the team another weapon at even-strength and on the powerplay.

It comes as no surprise that Rutherford has landed one of his top targets several weeks before the deadline. The veteran executive has never been shy to pull the trigger on a big deal, and with his dynamic duo getting older there is no time to waste when pursuing another Stanley Cup.

One statistic that may cause some anxiety in Pittsburgh fans? Zucker has just eight points in 31 career playoff games, and was held scoreless during his most recent series in 2018.

Bob McKenzie of TSN was first to break the deal on Twitter.