Monday: The Oilers have officially announced the Nurse extension. The deal will carry him through the 2021-22 season at a $5.6MM average annual value.

Sunday: Reports had surfaced earlier this week that the Oilers and Darnell Nurse were making progress in discussions for a contract extension.  TSN’s Bob McKenzie reports (Twitter link) that the two sides are close to finalizing a two-year deal that would carry a cap hit of slightly over $5.5MM.  TSN’s Darren Dreger adds (via Twitter) that the AAV will be $5.6MM.  That represents a sizable raise over his current $3.2MM salary and cap hit which would have represented his qualifying offer in June.

The 25-year-old has become a fixture on Edmonton’s blueline.  He reached the 40-point mark for the first time last season and has a chance of reaching that level again this year.  He also ranks second on the team in ice time per game, checking in at 22:46 per night behind only Oscar Klefbom. 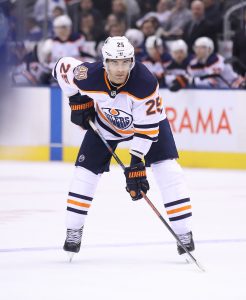 On the surface, someone that young and has that much of an impact on the team is someone that the Oilers would seemingly want to sign to a long-term deal, not a second bridge contract that walks him right to unrestricted free agent eligibility in the prime of his career as this deal ultimately does.  However, Edmonton’s salary cap situation ultimately made doing that next to impossible.

With this signing, Edmonton will now have a little over $68MM in commitments for 2020-21 to just 13 players.  Even with a small increase to the current $81.5MM Upper Limit, that doesn’t leave a lot of wiggle room to round out their roster as things currently stand.  A long-term pact with a higher AAV would have created an even bigger cap crunch for GM Ken Holland to work with this summer.

However, between now and 2022 when this deal will expire, Ryan Nugent-Hopkins, Mikko Koskinen, and Adam Larsson could all potentially be off the books if they’re not retained while James Neal will be in the final year of his deal.  Between that and a likely higher salary cap by then, that should give Holland some more wiggle room to work with down the road.  To that end, McKenzie notes (Twitter link) that the plan at this time is that the plan is to work out a long-term extension with Nurse in the 2021 offseason.  However, they are running a risk with this strategy as the allure of hitting the open market at 27 could be difficult for Nurse to ultimately pass up.  But for now, they’ll have one of their top blueliners signed for at least the next two seasons.