With Robin Lehner off the market, the New York Islanders went with their backup plan and grabbed former Colorado Avalanche keeper Semyon Varlamov. The team has announced that Varlamov has agreed to a four-year contact that will carry a $5MM average annual value. Varlamov will join Thomas Greiss in an Islanders’ tandem that is the reigning Jennings Trophy winners. 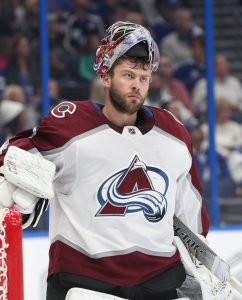 Varlamov, 31, has been a dominant goaltender in the NHL at times but on the surface doesn’t look like much of an upgrade from Lehner. Starting 39 games for the Colorado Avalanche last season he posted a .909 save percentage, but has been a Vezina finalist in the past and has a career .916 mark. He certainly could experience a boost in the Barry Trotz-led defensive system, but it is the length of the deal that seems out of place. Varlamov has dealt with injuries over his career and hasn’t played in a playoff game since 2014, not exactly the workhorse talent that GM Lou Lamoriello has targeted for his teams in the past.

The veteran goaltender came in at No. 20 on our Top 50 UFA list, though we projected him for just a two-year contract worth a total of $6.5MM. That number was obviously blown out of the water by the $20MM guarantee which includes a $6MM salary in year one. The Islanders had plenty of cap space to use today and were able to re-sign captain Anders Lee in addition to Varlamov, but the day clearly didn’t go as originally planned.  They’ll have to hope the tandem with Greiss can repeat last year’s performance and get them back to the playoffs in the Metropolitan Division.