The free agent period is now more than three weeks old and several interesting names remain unsigned. While Jake Gardiner is the top defenseman left on the open market, Ben Hutton is another option that would be much cheaper for a team closer to the cap. That might be why Luke Fox of Sportsnet reports that there is “strong interest from multiple teams” in Hutton, even at this later stage of free agency. 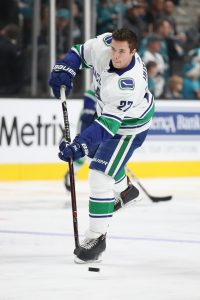 Hutton, 26, actually ranked 38th on our list of the Top 50 UFAs this year, thanks almost entirely to the huge role that he has played on the Vancouver Canucks the last several years. While he hasn’t shown very well in advanced statistics, the left-handed defenseman has averaged over 20 minutes a night through his four-year career including a whopping 22:21 per game in 2018-19. Hutton registered 20 points in 69 games last season with the Canucks and has 70 in his career, but is also a -75 as he and the rest of the team haven’t had much success during that time.

The Canucks decided not to qualify Hutton as a restricted free agent, an offer that would have been worth $2.8MM. That would have also allowed him to elect salary arbitration for an even bigger raise, something that Vancouver didn’t want to pay as they had their eyes set on bigger prizes. The team brought in Tyler Myers on one of the biggest deals in free agents at five-years, $30MM and also signed Jordie Benn and Oscar Fantenberg to round out their depth chart. Those three added to a group that is also bringing Quinn Hughes on for a full season didn’t have room for Hutton, especially at a relatively high salary.

But for another team, he may be the kind of player that can play a solid depth role or become perfect trade bait. A rebuilding club could continue to give him big minutes and hope his production improves even further, only to flip him down the road when teams are needy for playoff depth. Or, given his relative youth, if someone believes he can be a key player for them bring him in for a reasonable price now that the market frenzy has died down. Either way, the interest in Hutton isn’t surprising even if he has had to wait a few weeks.