The Vegas Golden Knights have officially announced a trade that will send Erik Haula to the Carolina Hurricanes in exchange for prospect Nicolas Roy and a conditional 2021 fifth-round pick. According to Pierre LeBrun of The Athletic, the two teams were talking about this trade at the draft but didn’t get it worked out for some reason. If Haula is on the Hurricanes roster in 2020-21, or if he is traded next season for a player, multiple draft picks or a single pick between rounds 1-5, the Golden Knights will receive the 2021 fifth. If none of those things occur, no pick will be sent. 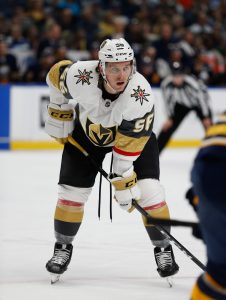 Haula, 28, played just 15 games for the Golden Knights last season thanks to a gruesome injury sustained in November. His year would finish with just seven points and though he was close to returning by the end of the Golden Knights’ playoff run, he wouldn’t be able to help them survive that wild game seven against the San Jose Sharks. In fact, he couldn’t help them at all for much of the season and Vegas got to see what it would be like to ice a team without the former Minnesota Wild forward. That absence plus the fact that the team desperately needs to shed salary this summer led to plenty of speculation that he could be one of the players on his way out.

The versatile forward had just one year left on his current contract, signed with the Golden Knights immediately after they plucked him from Minnesota along with Alex Tuch in the expansion draft. It carries just a $2.75MM cap hit, but with the ceiling set even lower than expected the crunch was on in Vegas to try and shed salary quickly. The fact that it seemed unlikely they would be able to re-sign Haula was only to the benefit of the Hurricanes, who bring in another talented forward to give them some more offensive punch.

It’s hard to remember given all the incredible storylines in the Golden Knights’ inaugural season, but Haula was another one of the players to shatter his previous career highs offensively after being offered a bigger role. He actually ranked second on the team in goals with 29 in 2017-18, establishing himself as a legitimate second-line center option and powerplay threat. The question was whether he would continue to line up in the middle now that the Golden Knights had Paul Stastny, another reason he became expendable this summer.

In Roy, the Golden Knights are at least getting back a little something of value in what was essentially a cap dump. The 22-year old forward was originally a fourth-round pick by the Hurricanes in 2015, but exploded offensively in junior hockey following his draft and seemed to be a classic case of a big frame taking a few more years to develop. The 6’4″ Roy continued to produce when he made the jump to professional hockey, recording seasons of 38 and 36 points for the Charlotte Checkers. The most impressive showing for the power forward may have been these most recent Calder Cup playoffs, where he was a force for the Checkers and recorded 15 points in 19 games en route to a league championship.

Still, this move was about getting some salary out of the way while moving out a body on the roster at the same time. The Golden Knights still project several million above the $81.5MM cap ceiling and have more work to do, and will continue to be one of the most interesting teams to watch this summer.