All eyes are on a handful of teams as the trade deadline approaches. If a front office isn’t calling the Ottawa Senators about Matt Duchene, there’s a good chance they’re on the phone with the Columbus Blue Jackets given the uncertain futures of Artemi Panarin and Sergei Bobrovsky. The pair of pending unrestricted free agents are almost certainly going to market in the summer if the Blue Jackets keep them through the end of the season, meaning they have to see what is available for them in trade before making a final decision. Aaron Portzline of The Athletic (subscription required) breaks down the entire Blue Jackets trade deadline situation including the most likely trade pieces if the team decides to go out and add a player for a potential playoff run—Duchene being the most recently linked option. 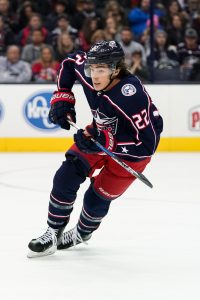 Of those potential trade pieces, Sonny Milano stands out as an interesting option. Portzline lists the 2014 first-round pick as a potential “sweetener” in any deal, explaining that it appears as though Milano no longer “factors into their plans.” If that’s true, and Milano is available as a sort of throw-in there will no doubt be teams interested.

Selected 16th overall in 2014, Milano had been part of an outstanding US National Development Team alongside players like Jack Eichel, Alex Tuch and Dylan Larkin (and even younger stars like Auston Matthews, Noah Hanifin and Zach Werenski for a time). The 17-year old Milano trailed in scoring only to Eichel, and would end up selected just between Larkin (15th overall) and Tuch (18th) in June’s draft. A jump to the OHL was a successful one, and Milano then transitioned to the minor leagues with immediate results.

Unfortunately, that success hasn’t quite translated to the NHL level. Through 70 games over four seasons, Milano has recorded 24 points but struggled to impact the game in various ways or consistently crack the Blue Jackets’ top-six. He’s played just eight games with the big club this season, instead spending most of the year with the Cleveland Monsters where he has 21 points in 24 games. Portzline writes that it was notable when Columbus did not recall the young forward when Nick Foligno was unavailable for a week last month.

For any acquiring team, there is also the issue of Milano’s pending free agency. The 22-year old will be a restricted free agent this summer but luckily is still not eligible for salary arbitration.