With the holiday season now here, PHR continues its look at what teams are thankful for as the season heads towards the midway mark. There also might be a few things your team would like down the road. Let’s take a look at what’s gone well in the early going and what could improve as the season rolls on for the St. Louis Blues.  Click here for the other articles in this series.

Tough decisions in the past to trade rentals.

Zach Sanford. Brayden Schenn. Dominik Bokk. Erik Foley. All of these St. Louis players are the result, in one way or another, of the deadline deals that the Blues have made over the last two seasons. In accepting their fate and trading pending unrestricted free agents in Kevin Shattenkirk and Paul Stastny, the team has improved their future tremendously, even if it hasn’t paid off just yet. While the Blues have struggled in the standings this season, they would be even worse off had they decided to hold on to Stastny and Shattenkirk only to watch them sign elsewhere on the open market.

Those kind of tough decisions are likely why many are pointing the finger towards the Blues as the trade deadline approaches, expecting them to sell off some prized assets like Alex Pietrangelo or Vladimir Tarasenko. GM Doug Armstrong’s been willing to watch long-time core members walk out the door before, will he do it again? 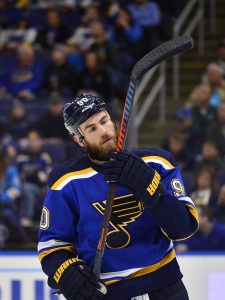 It’s easy to point to O’Reilly and make wild speculative jokes about how teams have struggled with him in the lineup, but the simple fact is that he’s been the Blues best forward for the entire season. Coming to St. Louis in a huge trade with the Buffalo Sabres that cost the Blues two high picks and young Tage Thompson, O’Reilly has been as advertised logging huge minutes and being a force at both ends of the rink. He’s the team scoring leader with 32 points in 34 games, has posted strong possession numbers once again, leads the league in faceoff percentage and is one of only three St. Louis forwards with a positive +/- rating (he leads the team at +3).

There are lots of things wrong with the Blues right now, but thankfully O’Reilly hasn’t been one of them. The 27-year old center should allow the team to move forward without a full rebuild, and help bring St. Louis back to the playoffs down the road.

It’s not that Jake Allen is a bad goaltender. Far from it in fact, as shown by his last ten appearances in which he has a .912 save percentage and a 6-3-1 record. The Blues can certainly win with him in net, but they can’t seem to be able to rely on him. Allen is perhaps the most frustratingly inconsistent netminder in the league, at times flashing brilliance moments before falling apart. His overall .900 save percentage on the season is a huge part of the Blues’ struggles, and without a reliable backup the team hasn’t been able to string together any successful performances.

It’s that backup role that has been so frustrating for the team this year, after watching Carter Hutton leave for Buffalo in free agency. Chad Johnson was brought in as the answer but struggled so mightily that the team waived him and saw him join the Anaheim Ducks. They now have Jordan Binnington on the roster, but with just two NHL performances under his belt it would be difficult to trust him should Allen go through another rough patch. Ville Husso’s continued struggles at the AHL level make it harder to see where the Blues’ solution will come from.

Some patience from the front office.

It’s not time to blow up the Blues and trade away extremely valuable assets like Tarasenko or Colton Parayko. Even Pietrangelo, who is closest to unrestricted free agency with just one more year on his contract should be almost untouchable unless a team offers a mountainous package in return. That package would have to include assets that can step right into the NHL and help now, instead of just prospects or picks down the line.

If things get worse over the next two months, there could be an immense amount of pressure on Armstrong to make a drastic move at the deadline. Patience needs to be preached in the St. Louis front office, or they risk making a trade that could quickly be regretted.