The continued improvement. Last season the Colorado Avalanche had an incredible season, going from one of the worst teams in the league to just squeaking into the playoffs. Colorado found themselves matched up with the top team in the league in the Nashville Predators and while no one gave the Avalanche any chance to beat the powerhouse squad, but the team still managed to take two games from them. This year has only gotten better for the franchise as they are currently tied for first place with the Predators in the Central Division and have started to show that they have an impressive team that is only getting better.

Their top line. Colorado’s top line of Nathan MacKinnon, Mikko Rantanen and Gabriel Landeskog was impressive last year, but they have only gotten better this year. MacKinnon, who had a breakout season last year after posting 39 goals last year, already has 18 goals and is on pace for an even bigger year. MacKinnon, the runner-up for the Hart Trophy, could take the award this year with the way he is playing as he has 41 points already and he’s not even at the half-way point of the season. 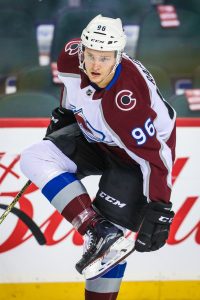 Rantanen already has 11 goals and 43 points in just 26 games as he’s on pace for an even bigger season. He could be one of MacKinnon’s biggest challengers for the Hart Trophy if the 22-year-old continues to play the way he has. Landeskog, on the other hand, is playing well with 15 goals already, which likely has him headed for a career-high. While they were a very good line a year ago, the pairing has become one of the top lines in the NHL now. With Landeskog only being 26 and the veteran of the group, the line could be together for a long time.

Secondary scoring. One of the team’s biggest problems is getting more scoring from its other lines. Many people felt that Tyson Jost and J.T. Compher might step up as well as other players, including Alexander Kerfoot and Colin Wilson. While they each have made some contributions, none of them have taken the next step. Jost has shown to be impressive when moved to the second line, yet he has just four goals and 10 points this season. Compher could be the answer, but has been out with a head injury. However, he has seven goals in the 10 games he’s played this year. Kerfoot has 18 points in 26 games, but only four of those are goals, while Wilson has seven goals and 10 points in 26 games.

The team needs one or two of these players (and preferably everyone) to take that next step and start providing the team with secondary scoring so when the first line gets shut down, the team doesn’t get shutout.

A young impact player. The team is quite young, but there is more talent on the way. The team could get a significant boost from 2017 first-round pick Cale Markar. The 20-year-old defenseman has been lighting up the college scene this year with the University of Massachusetts – Amherst. After posting respectable numbers as a freshman of five goals and 21 points in 34 games for the Minutemen, he has already topped those numbers in just 13 appearances. He already has six goals and 18 points with more than half a season to go. If the team can convince him to turn pro after the season, there is a good chance the fourth-overall pick could step right onto the ice during the stretch-run of the season and give the team another impact player on their defense.