The Anaheim Ducks have lost six straight games after falling to the Philadelphia Flyers 3-2 last night, and look like they’ll be making some changes. The team has recalled Kiefer Sherwood and Kalle Kossila from AHL San Diego while sending top prospect Sam Steel back down. Steel saw his ice time drop to just over 11 minutes against the Flyers, easily the lowest total of his young career. In addition, Joseph Blandisi has been returned to the AHL. 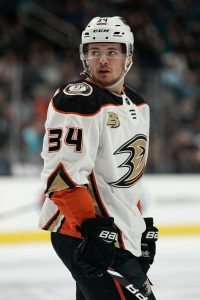 Selected in the first round of the 2016 NHL Entry Draft, Steel is still just 20 years old and is in his first year of professional hockey. A dominant offensive player at the junior level, he was limited to just three points in his first 13 games with the Ducks and none since scoring his first NHL goal on October 21st. Like many of the Ducks, his possession statistics have been quite poor through the first month of the season though he was holding his own in the faceoff circle at exactly 50%. That isn’t enough to keep him in the lineup though, and the Ducks will hope he can get his offensive confidence back while playing in the minor leagues.

The team has a game tomorrow against the New York Rangers, and it looks like Patrick Eaves may be ready to make his season debut after skating this morning on a line with Adam Henrique and Isac Lundestrom according to Eric Stephens of The Athletic. The team has also reunited the line of Andrew Cogliano, Ryan Kesler and Jakob Silfverberg as they try to spark their group. After riding a hot John Gibson to a few wins at the start of the season, the Ducks find themselves in a tailspin towards the bottom of the Pacific Division and could quickly find themselves at a real disadvantage in the playoff race if they can’t turn it around.