The Arizona Coyotes are hoping to make a run for the playoffs this season after an inspiring second half and several changes this summer. The team brought in Vinnie Hinostroza, Jordan Oesterle, Alex Galchenyuk and Michael Grabner, while retaining almost all of their key players—save for Max Domi, who was sent to Montreal. In order to really push for the postseason though they’ll need to stay healthy all season, and there was some more good news on that front today. Jakob Chychrun, who underwent his second knee surgery in a year back in April, has been cleared to skate according GM John Chayka who relayed the information to Craig Morgan of AZ Sports. Chychrun is just 17 weeks out from the procedure, and is expected to be a full participant in training camp. 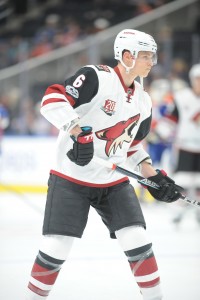 That’s huge news for the Coyotes but also is extremely important for Chychrun, who is heading into the final season of his entry-level contract without an injury-free season under his belt. The 20-year old defenseman has played just 68 and 50 games in his first two seasons, limited by two major knee injuries already. While he’s been impressive in his ability to recover from surgery, he needs to prove that he can stay on the ice for an entire season before the team commits to him going forward. He’s shown an ability to log top-four minutes in the NHL even as a teenager, and now must start to fulfill his extremely high potential and dominate the league.

Chychrun dropped to 16th overall during the 2016 draft, but many felt that was due to overexposure and perhaps some disinterest during his final year of junior hockey. He had long been projected as a potential top pick given his obvious talent at both ends of the rink, but saw Olli Juolevi, Mikhail Sergachev, Jake Bean and Charlie McAvoy all go off the board ahead of him on draft day. He’s played more NHL games than any of them—in fact Juolevi and Bean are still waiting to make their debuts—but hasn’t quite shown his full potential in Arizona. With Oliver Ekman-Larsson signed to a huge extension, Chychrun could provide the Coyotes with a rock solid second option on the left side for many years to come.