Free agency is now just days from opening up and there are quite a few prominent players set to hit the open market while many teams have key restricted free agents to re-sign. Here is a breakdown of Pittsburgh’s free agent situation. 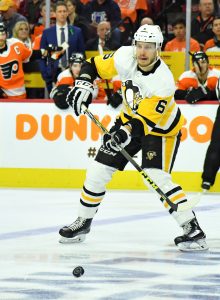 Key Restricted Free Agent: D Jamie Oleksiak – After locking up winger Bryan Rust earlier, Oleksiak is the lone remaining NHL RFA that the Penguins have.  The 25-year-old started out 2017-18 the same way his last couple of years had gone with Dallas – he was in and out of the lineup and wasn’t getting a lot of playing time when he did get to play.

His fortunes certainly changed for the better back in December when Pittsburgh acquired him for a conditional 2019 fourth-round draft pick.  He found a home as a regular on the third pairing and his performance picked up as a result.  He’s eligible for salary arbitration this summer but it’s more likely that they settle on a one-year pact that checks in a little bit above Oleksiak’s $1MM qualifying offer.

Key Unrestricted Free Agents: F Tom Kuhnhackl – The German checker was a bit of a surprise non-qualifier after playing a regular role this past season.  It later came out that he had rejected a two-year offer from the team, presumably at a rate close to his $726K qualifying offer.  The 26-year-old will now hit the open market in the hopes of finding another team willing to give him a spot on their fourth line.

F Carter Rowney – After being a regular for a big chunk of Pittsburgh’s 2017 Stanley Cup run, it didn’t result in a lot of playing time for Rowney in 2017-18.  He played in just over half of their games, predominantly on the fourth line.  The 29-year-old at least offers some positional versatility in that he can play both center and the wing which should help his cause as he looks to catch on elsewhere.

Projected Cap Space: After clearing out Conor Sheary and Matt Hunwick, the Penguins used a good chunk of those savings to bring back Riley Sheahan for $2.1MM.  That leaves them with a little over $8MM to work with, per CapFriendly.  It’s widely-anticipated that they will land defenseman Jack Johnson for around $3.2MM per year which gives them just under $5MM to work with.  Oleksiak will take up a small chunk of that while they need to add a forward or two to the roster as well.  They have enough space to work with to make a small addition in free agency but if they plan to make another splash, they will likely need to free up some more cap room to work with first.