One might think that after trading away so much young talent on Monday, that the Tampa Bay Lightning prospect cupboards could look a little bare. After all, they dealt both Brett Howden and Libor Hajek, two prospects who would be considered among the best of most teams around the league. Those assuming an empty cupboard though, would be mistaken. 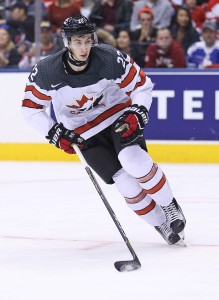 Today, the Lightning have recalled Anthony Cirelli from the Syracuse Crunch and he is expected to make his NHL debut tonight against the Dallas Stars. Cirelli is leading the Crunch—one of the AHL’s best teams—in scoring this season with 37 points through 51 games, his first (full-season) taste of the professional level. The 20-year old is extremely polished, and looks ready to take the next step and contribute at the NHL level.

Cirelli was selected 72nd-overall in 2015 after just a single season in the OHL, but quickly showed that he should have been taken much higher. In his second season for the Oshawa Generals, he was named captain after Islanders’ prospect Michael Dal Colle was traded midseason, and last year he was a big part of the silver medal-winning World Junior squad for Canada. Cirelli was tasked with a checking role for the squad, but still managed to contribute seven points in seven games.

Now, the Lightning will give him his first taste of NHL hockey where he can start to make an impact as a two-way presence in the bottom of their lineup. Though his game still has some growing to do, he’s a rare prospect that is expected to be as reliable defensively as they are exciting offensively. For the Lightning, who are trying to fend off the Boston Bruins and Toronto Maple Leafs for top spot in the Atlantic Division, an injection of young talent could be just what the doctor ordered.

Michael Bournival has been returned to Syracuse, and Cirelli’s call-up is under emergency conditions. That means he won’t count towards Tampa Bay’s four post-deadline recalls, unless they decide to keep him after players come back from injury.