News broke this morning that the New York Rangers had finally asked Rick Nash for his 18-team no-trade list, essentially confirmed what has been suspected for some time. The team plans on trading Nash before the deadline, trying to recoup as much value as possible out of the last few months of his current contract. 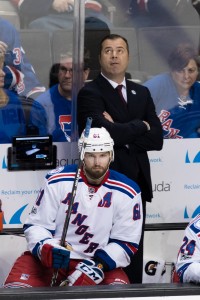 For years, Nash was one of the elite goal scoring talents in the NHL. Armed with excellent speed, a large frame and good hands, the power forward topped 40 goals in three different seasons, and 30 in five others. Since his 42-goal 2014-15 season things have started to trend downwards, but there is still effective hockey left in the 33-year old.

This year, Nash has scored 15 goals through 52 games and has seen his ice time increased back to more than 17 minutes a night. His value as a defensively responsible forward is still quite high, and he still spends nearly two minutes penalty killing every night.

Even with Nash’s large cap hit, the market could include several teams around the league. If the Rangers are willing to retain salary (which they are), several teams in the Western Conference could see him as one of the top additions, especially because of his two-way ability.

Dan Rosen of NHL.com lists the Dallas Stars, Nashville Predators, San Jose Sharks and St. Louis Blues as possible destinations, with others noting his familiarity with people like Ken Hitchcock and Joe Thornton. All four teams are battling for position in the West, and could end up driving the price higher and higher for top rentals.

Another interesting spot would be a return to Columbus, though it would take a trade between division rivals to pull it off. The Blue Jackets are looking for some more depth at forward—though specifically center if they had the choice—and would likely welcome the old face of their franchise back for one last run. The two sides did not leave on good terms when Nash was dealt in 2012, but that was some time ago and included a different front office regime.

Nash confirmed he had handed in his list today, and seemed upset at the thought he wouldn’t be a Ranger at the end of the season. Speaking to media including Sean Shapiro of The Athletic, he explained how hard it will be to tell his son that he isn’t with the team anymore.

It’s hard to imagine that the team won’t trade him now, but there is definitely the possibility that he returns to New York in the offseason. Knowing that, it would be foolish of the Rangers to not cash in on whatever return they can get, unless they truly believe they can compete this season in the playoffs. Even still, the return for Nash—which some are speculating could be as high as a first-round pick—is more valuable to the franchise than his contributions this season.