After a season that saw Teemu Pulkkinen put on waivers on several occasions and spend time with three different organizations, he has a new home for 2017-18. Pulkkinen, the Vegas Golden Knights’ selection from the Arizona Coyotes in the expansion draft has signed a one-year deal with the club for $700K. He was a restricted free agent with arbitration rights, but did not file before yesterday’s deadline. 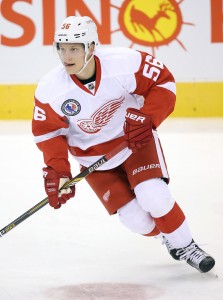 An incredible AHL scorer, Pulkkinen has received very little opportunity in the NHL throughout his career. While he possesses a huge shot and scoring instincts that can create offense all by himself, his skating ability has been critiqued at times along with his defensive responsibility. Last year, he scored 36 points in 47 games with the Iowa Wild after being selected off waivers from the Detroit Red Wings, only to be later traded to Arizona.

In the desert, Pulkkinen played just four games while being a healthy scratch several times. Through 83 NHL games in his career, he has 22 points but certainly will get a chance with the Golden Knights who will likely be desperate for goal scoring of any sort. Many of the forwards they chose have limited offensive upside, but Pulkkinen will surely produce at some rate if given the opportunity.