The Florida Panthers have re-signed one of their defensemen, inking Mark Pysyk to a three-year deal worth $8.2MM. Pysyk was an arbitration-eligible restricted free agent, but did not file yesterday before the deadline. He will be an unrestricted free agent at the end of the deal. 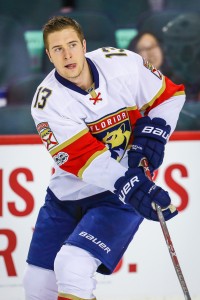 Pysyk came to the Panthers last offseason in a trade with the Buffalo Sabres, sending Dmitry Kulikov back the other way. After an incredibly poor season, Kulikov secured a three-year deal of his own worth $13MM from the Winnipeg Jets, one that will be interesting to compare to Pysyk’s new deal over the next few years.

In Florida, Pysyk became a huge part of their penalty kill unit and skated in all 82 games, finally proving that he’s a full-time NHL player. While his offense still leaves something to the imagination, he can capably recover pucks and get them out of his own end. In that way, he’s a perfect fit as a bottom-pairing defensive defenseman for the Panthers, slotted in behind the more offensively-minded players like Keith Yandle and Jason Demers.

Speaking of Demers, rumors have popped up lately about the possibility of a trade out of Florida after just one year of his new contract, and signing Pysyk for a few more years might help them facilitate that. The Panthers now have five other capable defenders in Pysyk, Yandle, Aaron Ekblad, Alex Petrovic and Michael Matheson, with Ian McCoshen and MacKenzie Weegar both pushing for playing time. Whether it is Demers or someone else, there is a possibility Florida moves out one of their defenseman before the season begins.

CapFriendly gave us the details on the contract.