Though the biggest task for the Minnesota Wild this summer is new deals for Nino Niederreiter and Mikael Granlund, the more pressing decision will be what to do with their glut of defenders prior to the expansion draft. Recently, our own Brian La Rose brought up the problem in his Offseason Keys piece for the Wild, indicating that losing either Jonas Brodin or Mathew Dumba for free in the draft would be a mistake. Enter the Boston Bruins, who today were reported by Joe Haggerty of CSNNE to be in discussions with the Wild over Brodin, an interest that goes all the way back to the trade deadline. 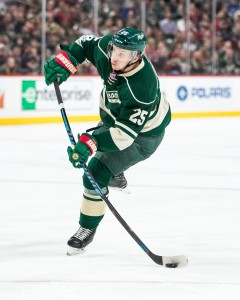 While it’s been clear since the season ended that the Bruins needed help on defense, Haggerty notes that it is on the left side in particular that they could use a top-4 player to pair with Charlie McAvoy next season. With news that Sami Vatanen has teams “lining up” for him recently, the Bruins likely won’t be one due to his handedness. Instead, the 23-year old Brodin is a perfect candidate if they can find a package that interests the Wild. On paper, the potential match of Ryan Spooner and a first-round pick suggested by Haggerty makes some sense, acquiring another player who needs protection seems out of the question for the Wild. It’s not only their defensive group who they’ll have trouble protecting, but up front as well since they have three no-movement clauses to deal with.

It will be interesting to see how the negotiations shake out, and if the Bruins give up their first-round pick in the process. As we examined recently, the Bruins are open to moving their top pick given that they’ve selected five times in the first round over the past two seasons, and have added a number of talented players—like Brandon Carlo, Jakob Forsbacka Karlsson and Anders Bjork—in the middle rounds as well. This may be the perfect time to dangle the 18th-overall pick in a deal to acquire some defensive help, and try to go after the Stanley Cup once again.