The Dallas Stars have signed veteran forward Joe Pavelski to a one-year extension with a base salary of $3.5MM, as originally reported by team reporter Mike Heika. EP Rinkside’s Sean Shapiro adds that Pavelski’s deal has up to $2MM in performance bonuses with CapFriendly clarifying that he’ll receive $1MM at 10 games played and $1MM at 20 games played. 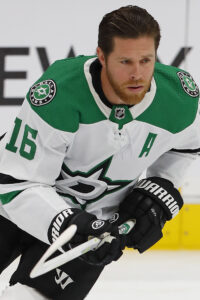 Taken all the way back in the legendary 2003 NHL Draft with the 205th overall pick, Pavelski has evolved into perhaps one of the most consistent players in league history. In his 17th NHL season at age 38, Pavelski is still rolling along with 37 points in 38 games while playing top-line minutes.

He had a somewhat disappointing first season in Dallas after signing there as a free agent in 2019. However, he’s been nothing short of spectacular ever since, alongside the team’s developing stars, Jason Robertson and Roope Hintz. Pavelski’s 54 assists and 81 points last season were both career highs.

Still, a Stanley Cup has eluded him throughout his time in Dallas and with the San Jose Sharks. He’s reached the Final twice, with San Jose in 2016 and Dallas in 2020, but has come up short both times. With the Stars flying high in a wide-open Western Conference this season, though, he should remain optimistic about his chances of getting back there a third time.

Pavelski’s 35+ contract eligibility allows Dallas to keep his cap hit lower (at the $3.5MM mark) while barely decreasing his total potential compensation. His potential performance bonuses of $2MM are up from $500,000 on his current one-year deal, meaning his actual pay cut is much lower than the decrease in cap hit suggests.

It’s an important contract for Dallas to get on the books for next year, and they made it clear they feel the same way by signing an extension on the first possible day. The team does have a sizable chunk of cash (~$75MM) committed to next year’s roster now, but the team can expect to rely on younger players like Wyatt Johnston, Ty Dellandrea, and potentially Logan Stankoven to play considerable roles in 2023-24 and ease cap constraints.

Pavelski had the following comments on his time in the Lone Star State:

I am grateful for the opportunity to continue being a member of the Stars organization. Sarah, Nate and I have loved being part of this team and Dallas/Fort Worth community for the past four years. We have an incredible group of players in this locker room, and I am excited to continue to work with my teammates toward our goal of winning the Stanley Cup.

For “Captain America”, the extension allows him to build on an illustrious career that has him as one of the best American-born players to lace up the skates. His 433 career goals are eighth all-time, just three behind Patrick Kane.