Jake Allen will be sticking around with the Canadiens for a little longer as the team announced that they’ve signed the goaltender to a two-year contract extension.  The deal will carry an AAV of $3.85MM.  Pierre LeBrun of TSN and The Athletic reports (Twitter link) that the deal breaks down as follows: 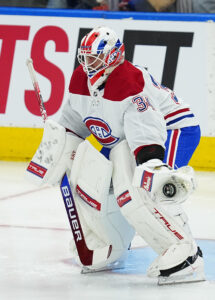 The 32-year-old is entering his third season with Montreal after being acquired from St. Louis back in 2020.  Barely a month after being acquired, he signed a two-year extension, the last season of which will be played this season with that deal carrying a $2.875MM AAV.  At the time, he was being brought in as more of a proven second option behind Carey Price.  However, that situation has changed with Price missing most of last season, likely all of this year, and the rest of his playing career being in question and this new contract reflects that change in role.

Last season, Allen played in 35 games with Montreal, posting a 3.30 GAA along with a .905 SV% in what was an injury-mired campaign.  He missed time in both concussion and COVID protocols while also dealing with groin trouble on two separate occasions.  Now healthy, he should get the bulk of the workload for the Canadiens this season with Samuel Montembeault serving as his backup.

Montreal doesn’t have a true goalie of the future just yet with Cayden Primeau representing the closest option to being NHL-ready.  This extension will basically serve as a bridge for the Canadiens to navigate through what’s expected to be a bit of an extended rebuild while also giving them some time to plan to draft or acquire their next starter.  It also takes what would have been one of the more intriguing rental veterans off the market as without this deal, Allen would have been a speculative candidate leading up to the trade deadline in March.