The Florida Panthers have locked up their future in net, signing Spencer Knight to a three-year extension. The deal kicks in for the 2023-24 season and will carry an average annual value of $4.5MM. Panthers general manager Bill Zito released a statement:

Spencer is a phenomenal goaltender, as well as an exceptional athlete and person. He has thrived in his professional career, dedicating himself to his training through his first two seasons with our organization. With this extension, we are excited about the present and future of Panthers goaltending. 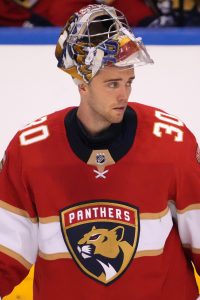 A three-year extension means Knight’s contract status now lines up with Sergei Bobrovsky, with both expiring after the 2025-26 season. While the team will have to carry a combined $14.5MM cap hit those three years, Knight will still be an RFA in the summer of 2026, meaning a long-term extension can still be worked out with the money that Bobrovsky was earning.

For this year, the 21-year-old netminder is still in the final season of his entry-level contract, despite already being a regular at the NHL level. The 13th overall pick from 2019 played in 32 games for the Panthers last season, registering a .908 save percentage. He also got into 11 games with the Charlotte Checkers to stay fresh, posting a .905 in the AHL.

Incredibly composed in net, Knight is basically the prototype for the modern NHL goaltender. Big and agile with strong positioning, there are few goaltending prospects better. While his results do leave a little bit of room for improvement, the Panthers obviously believe he is the real deal, signing him to a rather expensive bridge deal. He comes in ahead of Jake Oettinger (3 years, $4.0MM AAV), and Carter Hart (3 years, $3.979MM AAV), two other young goaltenders with big expectations.

It will be interesting to see how much Knight starts to take over in Florida, and whether the Panthers will ever consider moving on from Bobrovsky. While he holds a full no-movement clause at the moment, that will change to a 16-team no-trade list in the summer of 2024. It would obviously be difficult to move his massive contract but one thing in the Panthers’ favor is the financial structure. Bobrovsky will have earned $57.5MM of the $70MM deal by the end of 2023-24.

Regardless, locking up Knight at this point was important if they plan on giving him more responsibility this season. A breakout campaign would send his price skyrocketing, and potentially take a bridge deal off the table. Locking him in now is a bit risky, as it assumes he will continue to progress, but there aren’t many goaltenders that would be a better bet.