The lack of movement on the salary cap in recent seasons has caused specific contracts to look worse than they otherwise would have. That especially holds true for players who signed mid-tier, long-term deals in the mid-2010s who haven’t quite been able to hold up their previous standard of play. 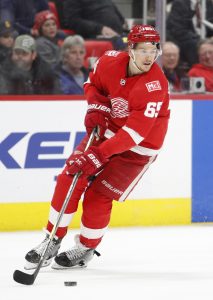 Longtime Detroit Red Wings defenseman Danny DeKeyser fits that bill perfectly, although we can’t discount the role injuries have played in his decline. An undrafted free agent signing out of Western Michigan University, DeKeyser was quietly an important part of Detroit’s post-Nicklas Lidstrom transformation on defense. During his first full NHL season in 2013-14, DeKeyser stayed in the NHL full-time, amassing 23 points in 65 games and averaging over 21 minutes per game, good enough for a handful of Calder Trophy votes.

After signing a six-year, $30MM contract following an arbitration filing in the summer of 2016, however, DeKeyser’s play (and contract value) began to diminish almost immediately. He did play a full 82 games during the first season of the contract, but after 2016-17, DeKeyser never played more than 65 games in a season. After injuries limited him to just eight games in 2019-20, DeKeyser’s ice time dipped to bottom-pairing minutes for the contract’s last two seasons.

Veteran defenseman will always carry value to NHL teams, though. While Detroit is looking to hand the keys over to a young defense core of Moritz Seider, Filip Hronek, and Simon Edvinsson, another team may still see a use for DeKeyser as an extra body or a bottom-pairing man. Injuries will always be a factor, though, and retirement remains on the table for the Detroit native.

At this point in the offseason, all the big fish have settled (especially on defense) and teams are mostly set for the upcoming season. Depth adds and AHL bodies can make or break a team’s season in some circumstances, though, and acquiring DeKeyser in that role at least gives teams a “we know what you are” option. The best balance for a team looking to acquire DeKeyser is likely as an insurance policy for a spot penciled for a younger, more inexperienced defenseman who has a high degree of uncertainty in their development.

If DeKeyser wants to stay in the Eastern Conference, the New York Rangers have an obvious need for this role. Their third-pairing spot at left defense is a battle between Libor Hajek and Zac Jones, both players who either have limited (or poor) NHL results so far. Signing DeKeyser doesn’t preclude either from playing NHL minutes if it’s what’s best for the team and their development, but it gives the Rangers an insurance policy that they currently don’t have. With Jarred Tinordi being the only other left defenseman under contract in the organization with NHL experience, DeKeyser fills a hole on the team’s depth chart.

Similarly, the Islanders are missing their resident old-man defender after letting both Andy Greene and Zdeno Chara go this offseason. While Robin Salo and (the other) Sebastian Aho do carry some promise for third-pairing roles this season alongside Scott Mayfield, DeKeyser gives that veteran insurance policy, something the Islanders undoubtedly value highly after last season’s catastrophes.

With DeKeyser’s declining play and sky-high injury risk, anything above a league-minimum contract is likely unattainable. A professional tryout contract if he does opt to continue his playing career might be a more realistic option at this stage.