Just a few hours before the draft, we have a massive trade. The Ottawa Senators have announced that they are acquiring superstar winger Alex DeBrincat from the Chicago Blackhawks for the seventh-overall pick, the 39th overall pick, and a 2024 third-round pick.

As relayed by Mark Lazerus of The Athletic, Blackhawks GM Kyle Davidson said the following regarding the deal:

It was an incredibly difficult decision to trade a player of Alex’s caliber. We feel as if this move sets the Blackhawks up for future success by giving us additional flexibility and future talent.

DeBrincat, 24, has one year remaining on his contract before he becomes a restricted free agent entitled to a $9MM qualifying offer. After that point, barring an extension, DeBrincat will become an unrestricted free agent. There is currently no word on any possible extension for DeBrincat, but one has to assume that the Senators will make every attempt to keep him in Ottawa beyond the two years of team control they have just acquired. 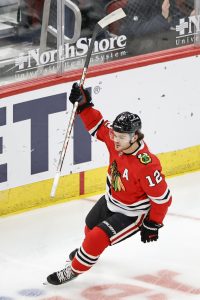 For the Senators, acquiring DeBrincat is a major coup as the team looks to escape their rebuild and finally return to contention. DeBrincat is a superstar forward in a relatively similar age range to the Senators’ other core pieces. He is close to the same age as Thomas Chabot and only a few years older than players such as Josh Norris and Brady Tkachuk. DeBrincat is an elite offensive player, having scored over 40 goals twice in his career, including this past season. His 78 points would have led the Senators in 2021-22, and the Senators have to be extremely excited about the possibility of DeBrincat playing with Tkachuk and Norris.

The contract situation is definitely something for Ottawa to monitor, as the Senators have had issues in the past with players not wanting to sign there long-term. But at the cost of their first-rounder, second-rounder, and a 2024 third, the chance to add a player of DeBrincat’s caliber for at least the next two years (and potentially longer) is definitely a risk worth taking.

For the Blackhawks, this trade is on one hand shocking and on the other wholly unsurprising. Davidson has made it no secret that he’d be stripping the roster bare in order to pursue a rebuild, and DeBrincat’s name had been floating in trade rumors for weeks. So the fact that he was ultimately dealt is not a surprise, especially when one considers the fact that the Blackhawks did not have a 2022 first-round pick until this trade. And having that seventh-overall pick is definitely a boon for a team looking to add more prospects to a depleted prospect pool.

That being said, there is a general sentiment that the return the Blackhawks received was a bit light when one takes into account DeBrincat’s age and talent level. A top-ten pick and a high second-rounder are two valuable assets, but only six players have scored more goals than DeBrincat over the last four years. He’s a superstar player who hasn’t even turned 25 years old. The last superstar-level player to be traded, Jack Eichel, net the Sabres a package that included NHL-ready talent such as Peyton Krebs and Alex Tuch as well as draft picks. While Eichel did have more years left on his contract, he also had some medical uncertainty, the kind of uncertainty the rarely-injured DeBrincat does not carry.

This trade is certainly going to be widely celebrated among Senators fans, but whether this trade is ultimately successful for Ottawa could depend on if they manage to sign DeBrincat to a long-term extension. For the Blackhawks, this trade is a major one, setting the tone for what could be a difficult few years as Davidson attempts to find the next set of core Blackhawks players. Finding one of those core players tonight, with the seventh-overall selection they just acquired, will be essential.