It’s clear that the veteran leadership in the Chicago Blackhawks dressing room is disappointed in the direction of the franchise the last few months, selling off young, core pieces for future assets. General manager Kyle Davidson has suggested it will be a five-plus year rebuild, something that doesn’t sound appealing to captain Jonathan Toews.

Unlike Toews, who has struggled in recent years to stay healthy and productive, Patrick Kane is still one of the most dynamic offensive players in the league and would likely draw a crowd if made available. While David Pagnotta of The Fourth Period tweets that the Blackhawks have engaged in trade discussions regarding Kane and lists the Dallas Stars as one of the teams with recent interest, Mark Lazerus of The Athletic has thrown cold water on any speculation. Lazerus has been informed by a source that there have been no trade talks so far, though admits that teams are likely “sniffing around” on the superstar forward. 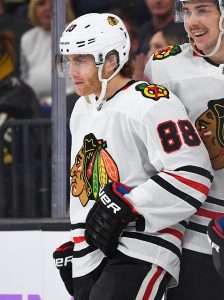 Kane, of course, holds most of the power here, with a full no-movement clause that allows him to dictate who he can be traded to, and when. If he wanted to stay in Chicago for the final year of his current contract, there’s nothing that the Blackhawks could do about it. If he’s willing to move though, it represents another high-priced asset that could allow Davidson to add even more talent to the team down the road.

For many fans in Chicago though, trading Kane (or Toews) is more than just moving out an asset. The first-overall pick in 2007 has spent his entire career with the Blackhawks, winning three Stanley Cup championships, a Calder Trophy, the Hart, Pearson, and Art Ross all in the same year, and a Conn Smythe. He has 1,180 points in 1,107 games and would be a lock for the Hall of Fame even if he retired today.

At 33, he is still very much a dominant presence in the NHL and scored 92 points just this past season. That actually might be part of the reason why the Blackhawks would want to move him in the first place. In a season in which they appear to be tanking for the best odds in the 2023 draft, Kane’s presence could potentially elevate teammates to competitive status and help them win too many games.

So while Toews has been vocal with some of his frustration, Kane remains the player most fans are focused on this offseason. If he gives the okay, there will likely be an arms race to try and acquire him, especially if the Blackhawks are willing to retain half of his remaining contract (and why wouldn’t they, really). Kane carries a cap hit of $10.5MM but is due just $6.9MM this season, with $4MM of that to be paid in signing bonuses.