While most of the players who had early arbitration dates have settled in recent days, that hasn’t been the case yet for the Predators and Yakov Trenin.  They have until the start of the hearing on Tuesday to reach an agreement; once the hearing starts, they will have to go through the process and wait for the award. 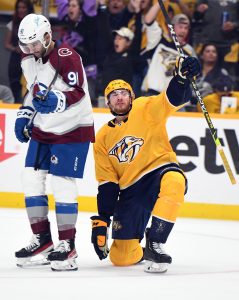 Trenin finally broke into the NHL in 2020-21, becoming a full-time player with the Predators. While he had just 11 points in 45 games, but he added two goals in the team’s six-game playoff run and cemented his place as an everyday NHL-er. With that year as a base point, this past year was when Trenin really made a name for himself in Nashville.

Functioning as part of the Predators’ “Herd” line with rookie Tanner Jeannot and veteran Colton Sissons, Trenin became a fan favorite, playing with the sort of passion that wows crowds and flusters opponents. Trenin’s line became central to the Predators’ desired “Smashville” team identity under coach John Hynes, and Trenin’s work ethic and physical style earned him an increased role.

In 80 games, Trenin had just 24 points. On paper, that’s not notable offensive production by any means. But 17 of those points were goals, and Trenin also had three goals in the team’s four-game playoff sweep at the hands of the eventual champions, the Colorado Avalanche. All of Trenin’s goals came at even strength, as he saw virtually no power-play time. Trenin also made himself valuable on the defensive side of the ice, skating as a second-unit penalty killer for most of the year.

In total, the package of skills Trenin brings to the table is intriguing. Trenin’s old-school, passionate game is one that has endeared him to fans and coaches alike. He scores goals at even strength, and perhaps he could even hit 20 goals with some shooting luck if we consider 17 to be a baseline. And, in addition to all that, Trenin is a capable penalty killer, effective defensive winger, and important member of a Predators line that looks like a set-in-stone trio for years to come. The points don’t jump off the page, and he doesn’t have an extensive track record, but if he can repeat his 2021-22 performance, he’s the kind of player that any team in the NHL would love to have.

Comparable contracts are restricted to those signed within restricted free agency which means UFA deals and entry-level pacts are ineligible to be used.  The contracts below fit within those parameters.  Player salaries also fall within the parameters of the submitted numbers by both sides of Trenin’s negotiation.

William Carrier (Golden Knights) – Carrier is admittedly on the lower end of comparable players, as his goal-scoring hasn’t come close to the heights Trenin has been able to reach. While Trenin’s 17-goal season dwarfs Carrier’s career high of eight in 54 games, if we set aside goal scoring, the comparison becomes clearer. Carrier has a relatively similar play style to Trenin: highly aggressive, physical, with a pace-pushing, always-active tempo. But since Carrier is an inferior goal-scorer and does not offer the same defensive/penalty-killing value, his $1.4MM cap hit should be seen as a floor for any Trenin contract.

Max Comtois (Ducks) – Finding a comparable for Trenin is difficult given the unique offerings present in Trenin’s game, but Comtois is a solid one nonetheless. More of an offensive player than Trenin, he signed a two-year deal with the Ducks after a breakout 2020-21 campaign, a deal worth just a shade over $2MM per year. Comtois scored 16 goals and 33 points in just 55 games in his platform year, better production than Trenin, but did so with more power-play opportunities than Trenin and a role higher in the lineup. He also doesn’t provide the sort of defensive value Trenin provides, although he wasn’t asked to shoulder much of a defensive load by coach Dallas Eakins. The Predators could simply point to Comtois’ scoring numbers and argue that Trenin, as a less productive player, has to be worth less than Comtois’ deal, but such a case would be discounting the intangible ways Trenin impacts the game.

Trenin is a difficult arbitration case to project because his overall value on the ice is difficult to capture on a piece of paper. The “points” column of a scoresheet might be the single most important area of evaluation for a player when it comes to contract negotiation, and that’s where Trenin’s case is weakest. But everywhere else, Trenin presents a strong case to be worth the $2.4MM he’s demanding. He’s a genuinely useful third-liner who has a ton to like in his game.

That being said, the lack of comparables doesn’t help Trenin, as there isn’t a sort of precedent-setting contract to guide an arbitrator. Additionally, the recent contract for Comtois, who was significantly more productive, coming in at around $2MM AAV, doesn’t help him in his chase of a number above that mark. Perhaps Trenin’s lack of experience, as this past year was his first true full regular season in the NHL, is what will hurt his case the most.

But, even with that in mind, after laying out all the positives in his game, it’s really difficult to make a compelling argument for why Trenin is worth less than $2MM on his next contract. He scores goals, brings all the sorts of physical intangibles coaches and fans want to see, and can kill penalties and provide legitimate defensive value.

With that whole package of skills brought to the table, the dollar values of the filings from each side may feel a bit low. That means this arbitration case will be a fascinating one to follow as we inch closer to August 2nd.