Free agency is now less than a month away and many teams are already looking ahead to when it opens up.  There will be several prominent players set to hit the open market in mid-July while many teams have key restricted free agents to re-sign as well.  Next up is a look at the Rangers. 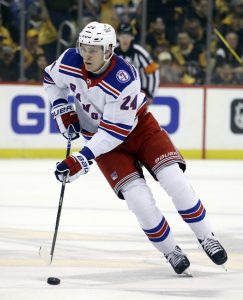 F Kaapo Kakko — The 2019 second-overall pick’s adjustment to the NHL has been a bit slower than expected, and it’s been a struggle for him to translate the scoring talent he showed in Finland to the NHL level. In 157 career games, Kakko has 26 goals and 58 points, including 18 points in his 2021-22 campaign, a season where he missed a solid chunk of the Rangers’ games due to injury. Kakko enters his first free agency on mixed ground. The points aren’t there for him to get a lucrative, long-term deal, but he showed flashes of the upside that got him drafted so high in the first place during the Rangers’ run to the Eastern Conference Final, fitting in on a “kid line” with fellow first-rounders Filip Chytil and Alexis Lafreniere, a line that powered the Rangers past the Carolina Hurricanes before being ultimately broken up against Tampa Bay. Kakko’s puck protection skills and abilities along the boards are strong, and it’s definitely possible that after three years in the NHL he’s just on the cusp of finally producing offense. And with Valeri Nichushkin helping the Colorado Avalanche potentially lift the Stanley Cup in the coming days, he could serve as a cautionary tale in giving up too early on talented, toolsy top picks who don’t have the points to show for their strong play early in their careers. But on the other hand, it’s also very possible that Kakko’s tools never result in him producing significant offense. The Rangers need all the cap space they can get, so expect a one or two-year bridge deal at this point.

G Alexandar Georgiev — Before the arrival of Igor Shesterkin, there was once a time when Georgiev had a chance to be the heir to Henrik Lundqvist on Broadway. Georgiev’s first taste of NHL action went well, with a .918 save percentage in ten games, and his first two full-time seasons were similarly impressive, as Georgiev posted a .914 in 2018-19 and a .910 in 2019-20. 2020-21 was a bit shakier, and as Georgiev ceded more and more starts to Shesterkin his play began to suffer. He finished that year with a .905 in 19 games. This year, Georgiev had his worst season in New York, with a .898 save percentage in 33 games. He simply did not play to the level he’d shown an ability to play at in the past, and the strength of Shesterkin, the Vezina Trophy favorite, emphasized Geoorgiev’s failings even more. Georgiev is due a qualifying offer of $2.65MM, per CapFriendly, so it’s not a guarantee that Georgiev is even tendered an offer for the Rangers to retain his rights. If Georgiev is going to have a cap hit around that number next year, it probably won’t be in New York.

F Ryan Strome — We previously covered the free agent situation of Ryan Strome in-depth, and it’s certainly a difficult situation for the Rangers to navigate. On one hand, Strome has fit extremely well in New York and produced like a strong top-six center. Over the past three seasons, Strome has 162 points in 200 games, which is a 66-point 82-game pace. Centers who can score in the 60-70 point range don’t hit free agency often, and when they do, they get paid. But Strome’s numbers do come with one slight asterisk: he’s been the linemate of Artemi Panarin, a superstar, play-driving offensive force. Panarin being mentioned isn’t meant in any way to downplay Strome’s skill — it’s not like you can just put any center on Panarin’s line and have him produce like Strome — but instead is meant to raise the question that Strome will need to answer this summer. Is he the play-driving, line-anchoring top-six center he’s produced like? Or is he more of a passenger, capable of piling up points when he gets the chance to ride shotgun next to elite scorers? The Rangers will be the first team that will need to ponder those questions as they consider whether to commit to Strome long-term.

F Andrew Copp — Copp was acquired from the Winnipeg Jets at the trade deadline, and he’s been everything the Rangers could have hoped for and more. Copp had 18 points in 16 games after the trade, and added on 14 points in 20 playoff games, giving him a grand total of 32 points in 36 games in New York. Before 2020-21, Copp was widely viewed as a defense-first, versatile forward who probably wouldn’t end up being an offensive difference-maker. But after putting up 39 points in 55 games during the pandemic-shortened 2020-21 season, his outlook has changed quite a bit. Now, he looks more like a true two-way force who can fit in a top-six. Given how well he played as a Ranger after the trade, it seems like staying in New York could be his best choice. But the Rangers will have a hard time finding enough cap space to keep both Strome and Copp, so they may end up having to choose one.

F Tyler Motte — Another member of the Rangers’ platoon of trade-deadline additions, Motte has endeared himself to both Rangers fans and fans of the team he became an NHL regular with, the Vancouver Canucks. It’s Motte’s hard-nosed, ever-active style of play that makes him so widely appreciated by both fans and coaches alike, but in the absence of offensive production, how much is that style of play worth? Motte had only 15 points in 58 games this season and only two in the Rangers’ playoff run. Offensive production isn’t what he’s in the NHL to provide, but it will put a ceiling on his earning power this summer. On the open market, it’s definitely possible that Motte could earn a deal with a decent term at around $1.5-2.5MM. Motte’s Rangers teammate, Barclay Goodrow, earned a long-term deal carrying a $3.6MM AAV coming off of a season where he had only five more points than Motte did this year, but Goodrow also had two Stanley Cup rings on his resume, an asset GM’s value highly and something Motte currently lacks. Wherever he ends up this summer, New York or elsewhere, look for Motte to quickly become a favorite of his coach and fanbase.

This is where things get tricky for GM Chris Drury. The Rangers, on paper, are in decent shape. They have just under $12MM in projected cap space going into next season, a number that could rise even higher if they find a way out from under frequent healthy scratch Patrik Nemeth’s $2.5MM AAV deal. But just because New York has $12MM now doesn’t mean they can be just as active as they’ve been in the past. Next offseason, the Rangers will have both K’Andre Miller and Lafreniere hitting restricted free agency. The Rangers undoubtedly want to keep both in New York long-term, but spending significant money this offseason could make long-term deals for those two players nearly impossible. It could even be three players the Rangers want to lock up long-term if Chytil spends 2022-23 playing as he did against the Hurricanes. So while the Rangers definitely want to use this offseason to maximize their odds of overcoming the on-ice challenges they’ll face next spring, they can’t lose sight of the off-ice challenges they’ll face next summer. Those two (or three) looming deals could impact every choice the Rangers make in the next few months.