The Colorado Avalanche have signed Kurtis MacDermid to a two-year extension, one that keeps him under contract through the 2023-24 season. The deal will pay MacDermid $975K in the first year and $1.0MM in the second, according to Elliotte Friedman of Sportsnet. 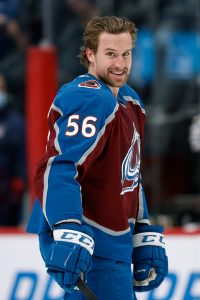 MacDermid, 28, is mostly a defenseman, though he has actually lined up a handful of times this season for the Avalanche, whenever they need a bit of extra physicality upfront. The 6’5″ behemoth is one of the most imposing players in the league, and plays a style of hockey not usually found in the NHL these days.

Averaging just over seven minutes a night through 53 games, he sort of represents the classic enforcer, though he has just six fighting majors on the year. Instead, he racks up hits in his short shifts, totaling 96 on the year despite playing only 395 total minutes. That goes along with 72 penalty minutes, second on the Avalanche (Gabriel Landeskog, 78), and five points. Should he reach nine, it would represent a career-high.

MacDermid has now played in 171 NHL games and is obviously a valued member of the Avalanche organization, not bad for a player who went undrafted and played three full years of junior even after his entry-level contract was originally signed. He was actually the Seattle Kraken’s choice in last year’s expansion draft from the Los Angeles Kings, though he never actually played for the club. The Avalanche spent a fourth-round pick to get him, and now have given him some additional stability with another two-year, one-way contract.

While he may not play every game over the next two seasons, a contract like this represents almost zero risk for the Avalanche. The entire cap hit–of $987.5K–can be buried in the minor leagues if necessary, though that would require him to pass through waivers.