The Panthers have added to their back end, acquiring Ben Chiarot from the Canadiens in exchange for their 2023 first-round pick, a 2022 fourth-round selection (acquired in today’s Frank Vatrano trade), and prospect center Ty Smilanic.  Montreal will retain 50% of Chiarot’s $3.5MM AAV as part of the deal.  Florida GM Bill Zito released the following statement about his newest rearguard:

Ben is a solid veteran defenseman that will bring both experience and size to our blue line. Having reached the Stanley Cup Final with Montreal last season, he is a player that knows what it takes to make a deep playoff run, which is what our organization is striving for in these next few months. 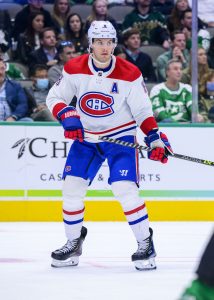 The 30-year-old blueliner has worked his way up from being a role player in Winnipeg to a key part of Montreal’s back end, logging at least 21:47 a night in each of his three seasons with the Canadiens.  His offensive numbers aren’t overly exciting – just seven goals and 11 assists in 54 games – but he is better known for his physicality and defensive game, elements that the Panthers certainly covet as they load up for what they hope will be a lengthy playoff run.

It’s Chiarot’s performance in the playoffs last season that had him on the radar for several contenders and had Montreal setting a high asking price comparable to last season’s David Savard trade.  He logged more than 25 minutes a night for the Canadiens in their improbable run to the Stanley Cup Final, playing a key shutdown role along the way.  That’s likely the role that Florida envisions for him as a complementary partner for Aaron Ekblad on their top pairing, allowing MacKenzie Weegar to drop to the second pair.  The net cap cost in this trade is still lower than Vatrano’s so Florida still has ample cap space to work with to try to make another addition before Monday’s trade deadline.

It should come as no surprise that Chiarot was traded with Montreal well out of playoff contention and the fact the team made him a healthy scratch against Arizona on Tuesday for what was termed a managerial decision.  They managed to add three future assets including the first-round pick they were coveting.  Worth noting is that while there is no condition on Florida’s 2023 first-rounder, the deal could technically change if Florida was to somehow fall out of the playoffs and land a top-ten pick this year.  In that case, this 2023 pick would be conveyed to Buffalo from the Sam Reinhart trade.  Of course, that’s extremely unlikely to happen.  The Canadiens will also assume the conditions on the fourth-rounder from the Vatrano deal and will receive the lowest-rated of the fourth-round selections the Rangers have – their own and Winnipeg’s.

As for Smilanic, the 20-year-old was a third-round selection (74th overall) back in 2020.  He has played in 38 games with Quinnipiac of the NCAA this season, picking up 13 goals and nine assists.  He was also selected to USA’s entry into the since-postponed World Juniors.  Montreal has until August 15, 2024 to sign him to an entry-level deal.

Sportsnet’s Elliotte Friedman was first to report that Chiarot was being traded to Montreal.