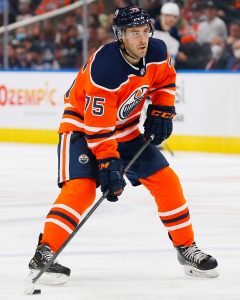 Bouchard has seemingly been on the cusp for a while as Edmonton has slow-played his development and that patience looks to be well-rewarded as the 22-year-old is off to a nice start this season and has secured a spot in their top four.  An offensive blueliner, Bouchard will have a shot at putting up some good numbers over the next two seasons which could push his bridge contract into the $2MM territory; their cap situation will likely force them to go with a short-term deal, similar to their other youngsters.  Bouchard is also on pace to hit multiple ‘A’ bonuses (each worth a quarter of that bonus total above) and with them being well into LTIR, anything he reaches will come off the 2022-23 cap.

Puljujarvi’s second stint with Edmonton has gone a lot better than the first as the 2016 fourth-overall pick has now been able to lock down a spot in their top six and is off to quite the start this season which is always notable in a contract year.  He’ll have arbitration eligibility and if he even comes close to the point per game mark (he’s currently at 1.2), his next deal could be in the $5MM or more range.  If he drops back a bit, tripling his current AAV could be the ceiling on a short-term pact.  Yamamoto was basically stuck signing a one-year deal for cap reasons, giving him the chance to outperform it and hit arbitration with a strong case.  That hasn’t happened just yet as he’s off to a quiet start.  Still, his performance in 2019-20, even in a shortened stint, could loom large with an arbitrator; doubling his current price tag on a one-year deal certainly isn’t out of the question.

Turris looked to be a decent value signing when he joined Edmonton but that didn’t exactly go as planned.  He struggled to stay in the lineup last season, ultimately clearing waivers.  As things stand, he’s a possible PTO candidate next summer.  Archibald’s health situation has put his future for next season in question while Perlini and Sceviour are holding down roster spots that will need to be kept at the minimum.  Benson is just getting his feet wet and has been viewed as one of their better prospects in the past but he’ll need to establish himself as a regular if he wants to get more than the minimum next season.

Russell is finally now at a price tag that’s a better fit for the role he has.  He’s clearly a depth defender at this point of his career and aside from shot blocks, doesn’t bring much to the table in terms of stats.  Another dip is certainly possible and as he’ll be on a 35+ contract next year, it’s likely he’ll be going year to year from here on out.

Koskinen’s contract has not aged well for the Oilers as his inconsistency has limited him to a backup role at a high price tag for someone in that role.  He’s off to a stronger start this season which should keep him on the NHL radar (and, for the time being at least, takes him out of the ‘Worst Value’ category) but unless he really ascends to the number one spot, he could check in closer to half of his current price tag.  Stalock’s not expected to play this season due to a heart condition so at this point, it seems unlikely he’ll have a contract for next year unless he recovers and is able to return.  Even at that, it’d almost certainly be a low-cost one-year pact.

Shore did well enough last season to earn a two-year commitment to play a similar depth role for Edmonton.  His spot is another one that they’ll need to keep cheap based on their salary structure and if he remains in and out of the lineup or on the fourth line, Shore won’t be able to command much more of a raise.

Keith was brought over from Chicago in the offseason in a move that raised some eyebrows in terms of whether or not that was the best use of their limited cap space.  He’s playing a more limited role which is more suited to where he is at this stage of his career and is doing okay early on.  Considering he’ll be turning 40 soon after reaching free agency in 2023, it’s fair to wonder if there will be another contract for him let alone how much lower it would be.  Koekkoek opted to stick around after testing free agency and as a low-minute depth defender, it’s hard to imagine his price tag going up much moving forward.  Klefbom is once again out for the season and on LTIR and at this point, it’s reasonable to suspect that will be the case again next year and if that happens, his career is basically over.

Smith was brought back last summer after their other attempts to upgrade between the pipes didn’t pan out.  It worked out quite well for Edmonton in the end as the 39-year-old basically had his best season in almost a decade, earning him a two-year deal which is an outcome few would have expected a year and a half ago.  Even if he’s just a backup over that span, that’s still below market value for a decent second-stringer so the Oilers should get good value from his deal.

Kassian’s contract was risky from the moment it was signed and the flattened Upper Limit hasn’t helped.  When he’s at his best, he’s a capable top-six power forward and is well worth the money.  When things aren’t going as well, he’s on the fourth line at times and isn’t close to worth it.  The inconsistency makes it hard to move him and the dimension he brings has made the Oilers want to keep him.  That all said, it’s difficult to envision a bigger contract in three years.  Foegele came over in an offseason trade from Carolina and remains in the same type of role he had with the Hurricanes.  Based on the most recent UFA market, there should be some room for a raise on Foegele’s next deal but playing in the top six more consistently would certainly bolster his chances of getting an AAV in the $3MM range.

It’s quite something how Barrie’s value has changed in recent years.  In 2019, he was coming off a career year with Colorado and it looked like an inevitability that he was heading for a significant raise on his then-$5.5MM AAV.  But things didn’t go well following a trade to Toronto and his market dropped, resulting in the one-year deal he had last season.  Even though his production jumped back up (to even better per-game numbers than he had with the Avs), he opted to forego testing the open market again, instead inking this new deal which is still lower than his last one in Colorado.  His defensive limitations are well-known but if Barrie continues to put up the points, the Oilers will get a good return on this deal.

It may seem a little odd to call the highest AAV contract in the history of the league a team-friendly one but it certainly seems like that’s the case when it comes to McDavid.  A perennial MVP candidate, he has the ability to take over a game at any time.  He’ll be 29 when he signs his next contract and it’s not unreasonable to think that he’ll eclipse his current price tag even with the expectation that he may be slowing down by the end of it.  Draisaitl has been basically just as potent as McDavid the last few years at a considerably cheaper price tag.  He’s a top center in his own right and his all-around game has improved the last few seasons as well.  Draisaitl will be 30 when he signs his next deal and there’s a good case to make that he should earn McDavid money at that time.

Hyman’s contract is one that will vary in value as it goes along.  He’s the right complementary piece for their top centers and Edmonton will get a good return in the first few years.  But players that play the way Hyman does don’t typically age too well so those last couple of years could be an issue from a value standpoint.  That said, they’re trying to win now and as far as fits go, he was one of the top ones in free agency.  Nugent-Hopkins is in a similar situation.  As long as he’s putting up top-six production, they’ll do quite well on this deal; that type of output should be sustainable for several years.  But by the end, he may be more of a role player.  Even so, the surplus value generated in the first few seasons should help make up for the last couple of years of the contract.

Nurse’s decision to go for basically a second bridge deal worked out perfectly for him.  He had his best season in 2020-21, showing himself to be capable of being the top defender they need him to be.  That, coupled with the big market for top rearguards this summer, helped earn him this contract.  He will soon be one of the highest-paid defensemen in the league but if he plays at the level he did last season, he’ll be worth the money.  Ceci’s contract was one of the more surprising ones.  After having success with Pittsburgh in a more limited role, Edmonton inked the veteran to play the type of role he struggled with in the past while giving him a four-year commitment in the process.  He’s young enough that the term won’t be an issue in terms of durability but banking on his performance last season carrying over carries some risk.

Get used to the Oilers being up against the cap ceiling as that’s not going to change anytime soon.  The heavy lifting is largely done for GM Ken Holland with the bridge deals for Puljujarvi and Yamamoto being the next key items on his checklist.  However, with not a lot of money coming off the books next summer and Nurse getting a $3.9MM raise, they may be in tough to keep the core intact, re-sign those two, and fill out the rest of the roster.  If they can make it happen, it’s safe to say there won’t be any other major additions coming to their core for a little while.