Defenseman Charlie McAvoy has signed an eight-year extension with the Boston Bruins, per TSN’s Bob McKenzie. The deal carries a cap hit of $9.5MM, taking him through the 2029-30 season. Daily Faceoff’s Frank Seravalli reports the details of the contract: 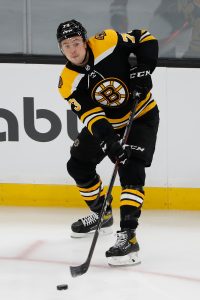 This contract is the fourth big-money deal handed out to restricted free agent defensemen within the last few months, joining just Dallas’ Miro Heiskanen with an eight-year deal. McAvoy’s cap hit slots above Cale Makar’s $9.0MM and just below Zach Werenski’s $9.58MM, but he’s signed for more term than either of those players.

McAvoy has been a consistent top-flight two-way defenseman ever since his rookie season in 2017-18. While he’s yet to play a full 82-game season in his career, fighting injuries and the pandemic, he’s now finished top ten in Norris Trophy voting for two consecutive seasons. He’s scored between 28 and 32 points every season of his career, totalling 122 points in 235 contests. His ice time has steadily climbed from the 22:09 mark he logged in his rookie season, hitting 24:00 per night last season.

While McAvoy’s point totals may not come with the same ’wow’ factor as a Makar or Quinn Hughes, he’s become arguably a top-ten defenseman in the league due to his off-the-charts hockey IQ and two-way acumen. His lower point rates than his peers also shouldn’t be taken to say that McAvoy isn’t an elite offensive play driver – he is, seeing 52.4% of his career zone starts in the offensive zone. He can log legitimate zone time in the defensive end too, excelling just as well there. Over his career, McAvoy’s controlled 54.4% of Corsi at even strength. A capable penalty killer as well, McAvoy remains one of the best all-around packages in the league. At just 23, the potential is still tantalizing.

Few will complain about having a franchise stalwart locked up for eight years, but this deal offers a certain level of cap security for the Bruins as well. Per CapFriendly, the team enters next year with $13.1MM in cap space with just Patrice Bergeron and Jake DeBrusk as notable players to re-sign.