New Jersey, he’ll always be a Devil. Travis Zajac has signed a one-day contract with the New Jersey Devils before announcing his retirement from a playing career that lasted more than 1,000 games. Zajac will remain with the Devils organization in an on/off-ice player development and consulting role, while also working to grow the club’s youth hockey initiatives. The veteran forward thanked everyone along the way, while Devils managing partner David Blitzer released a statement as well: 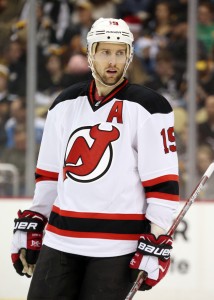 During his 15-year NHL career, Travis Zajac’s consistent preparation, commitment and performance epitomized what it meant to be a New Jersey Devil. Win or lose, Travis’ teammates, coaches and fans could always count on him to play the right way.  I am thrilled that Travis, his wife Nicole and their children will continue to make New Jersey their home, and they will be a valued part of the Devils organization moving forward.

Originally selected 20th overall in 2004, Zajac would be in the NHL full-time by 2006-07 and never look back. He scored 17 goals and 42 points that rookie season, numbers that would seem routine for him over the next decade. He reached a career-high of 25 goals and 67 points in the 2009-10 season and racked up 552 points in 1,037 career regular season games. All but 13 of those came with the Devils organization, though Zajac did have a short sojourn with the New York Islanders earlier this year, as GM Lou Lamoriello, who drafted him so many years ago, acquired the 36-year-old forward for a playoff run.

Despite having so much personal success, Zajac actually didn’t get that many chances to suit up in the postseason. He managed just 71 playoff games over his long career, only once going deep–the Stanley Cup Finals in 2012. A reliable two-way presence, he did receive Selke Trophy votes in seven different seasons, finishing sixth in 2010.

Now hanging up his skates, he’ll join the same Devils organization that has always been his home and help the next wave of talent reach the NHL.