Less than a year ago, Eric Staal was coming off another season of being Minnesota’s number one center with Buffalo moving to acquire him in the hopes of boosting their second line.  That didn’t happen and the veteran’s value took a steep hit as a result when it came time for the Sabres to trade him.  Considering he remains unsigned, Staal’s value appears to have taken another hit now. 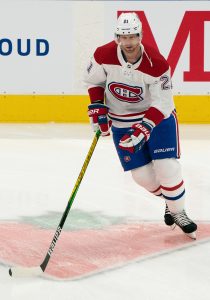 Things did not go well at all for the 36-year-old with Buffalo although, to be fair, that can be said for basically everyone last season.  He struggled to produce at a top-nine level let alone the top-line one he had been at with the Wild.  The hope was a trade to a playoff team in Montreal might revitalize him but outside of an early overtime winner, there’s a case to be made that he was even worse with the Canadiens than he was with the Sabres.

What might help Staal’s case was his playoff performance.  He centered their fourth line throughout the postseason and was a bit more impactful on a line that primarily slowed the play to a crawl and focused on cycling and board battles.  He was able to keep up despite playing through an injury and contributed a bit more on the scoresheet as Montreal surprisingly advanced to the Stanley Cup Final.

At this point, the question is whether or not teams think last season was a one-off in declining production (perhaps in part due to injury) or a sign of things to come.  The former means he can still contribute while the latter is someone that may have a hard time staying in the lineup.

Similar to Derick Brassard, Staal’s suitors are likely to be teams looking to add veteran depth knowing they have some unproven options or ones that would like a prospect to spend more time in the minors and would use Staal as a filler in the short term.

The Staal brothers have spoken in the past about a desire to play together but that doesn’t appear to be a viable option.  Detroit has already added Pius Suter and Mitchell Stephens this summer and has Joseph Veleno pushing for a spot; the recent buyout of Frans Nielsen doesn’t really create an opening for Staal either.  Meanwhile, Carolina brought in Derek Stepan to supplement their top three centers and don’t really have a spot for Staal.

Among the teams looking for depth, his old team in Minnesota makes some sense on paper based on the current composition of their roster.  But GM Bill Guerin saw fit to trade him 11 months ago for a winger who was coming off a tough year at a time where they needed centers so that may not be a realistic fit.  Montreal GM Marc Bergevin didn’t close the door on re-signing Staal earlier this summer and their projected top three centers have limited NHL experience.  Vegas has added some younger centers to push for playing time but if Staal was willing to sign for the minimum, he could be an insurance policy.  The same goes for Winnipeg who is quite capped out but lost a lot of veteran depth this summer.

As for the teams that could want Staal as a short-term stopgap to allow someone to develop, the usual teams come to mind.  Columbus doesn’t have much proven depth down the middle while Ottawa has had Chris Tierney available for a while and could use Staal as a replacement.

Staal narrowly made it onto our Top 50 UFA list, ranking 48th with a projected one-year, $2MM contract.  That may be a bit optimistic at this point with many teams basically having their rosters finalized or close to it.  Something closer to half of that may be more palatable at this point although it’s worth noting that Staal is eligible for performance incentives that could be tacked onto a lower base salary to give the signing team a little more salary cap flexibility next season.  Either way, it’ll be a steep drop from the $3.25MM AAV he had for the past two years.