The offseason is in full flight with the draft and free agency fast approaching.  We continue our series which examines what each team needs to accomplish over the coming weeks and months.  Next up is a look at Vegas.

It was another deep playoff run for the Golden Knights as they made their way to the third round before falling to Montreal.  With most of the core already under contract, GM Kelly McCrimmon will have some work to do if he wants to shake up his group and add some missing pieces.

With over $76MM in commitments for next season already and a prominent unrestricted free agent (who will be addressed later), there isn’t much in the way of financial wiggle room for Vegas.  It’s not necessarily a situation where they have to exactly match money but if they want to add a significant piece, they probably will need to send a notable contract the other way.  Even if they don’t make any big moves, keeping some wiggle room so that they don’t have to dress less than 18 skaters for multiple games would be worthwhile.

Vegas has done well putting together a capable group of centers despite not really adding one in their expansion draft or in free agency.  It’s not the best group in the league by any stretch but it has been effective so far.  William Karlsson hasn’t quite been able to repeat his numbers from his first season with the Golden Knights but at the very least, he’s a capable second option.  Chandler Stephenson has gone from a role player with Washington to a strong two-way presence with Vegas.  Again, he’s not a top option but he’s a solid piece.  That’s a decent core.

But is decent good enough?  A legitimate number one center would put those two in more optimal spots and really deepen the lineup.  That’s a tough ask considering there really is only one available in Jack Eichel and bringing in someone with a $10MM cap hit would be difficult to fit in.  But another second liner would certainly bolster their fortunes.  With Cody Glass not working out on the third line, the production from that trio suffered.  If they effectively had three second line centers, they’d be closer to where they were when Paul Stastny was on the team.  That would be a more realistic goal for McCrimmon to aim for.

Vegas made a pair of moves before the transaction freeze to add a pair of players who they hope could become useful pieces in Nolan Patrick and Brett Howden.  Both have draft pick pedigree having been first-round picks (Patrick 2nd, Howden 26th) but haven’t panned out yet.  In a perfect world, Patrick becomes that impact pivot but the way the last two years have gone, it’s hard to see that happening.  Howden could help in a limited role but it’s doubtful he’ll be an impact scorer.  Those pieces could help from a depth perspective but McCrimmon would be wise to add someone with a better track record offensively.

With their limited cap room, it’s going to be hard for Vegas to keep pending UFA defenseman Alec Martinez but they’re certainly going to try to keep him in the fold.  Earlier today, Pierre LeBrun of TSN and The Athletic reported (Twitter link) that the 33-year-old is mulling over an offer from the Golden Knights although he’d likely be leaving some money on the table to stick around compared to what he’d be able to get on the open market. 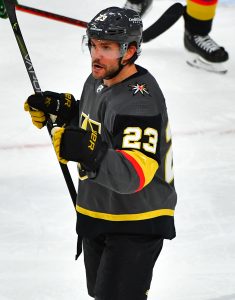 The decision to bring Martinez in back before the 2020 trade deadline proved to be a good one as he made an immediate impact before the shutdown for the pandemic and played quite well for them in the bubble.  That carried over to 2020-21 where he logged over 22 minutes per game while picking up 32 points in 53 games, the best point per game average over his career.  His production tapered off a bit in the playoffs but to be fair, he was also playing with a broken foot.  With how he has performed the last few years, there will be no shortage of interest if he gets to the open market.

If Vegas can’t agree on a contract with Martinez, they’ll need to find a way to replace him.  Nic Hague played well this season but is he ready to step into a top-four spot on the left side?  That would be a big jump for someone that has been limited to 16 minutes a night in his first two years and was healthy scratched at times in the playoffs.  He may be able to get there eventually but for now, finding a short-term stopgap option to hold down that role for a year or two would be a wise course of action.  It’ll be tough to do with their cap structure but with them having an offer out to Martinez, it would appear they have a plan to try to free up some money to make it happen.

That money-saving plan may very well have to come between the pipes.  Having both Marc-Andre Fleury and Robin Lehner was a nice luxury for Vegas this past season but given their cap-related adventures during the year, that luxury helped create some of their problems when they were forced to go with a short roster.  While having starter-level goaltending each night would be great to have, can they afford to have both of them on the roster again?

If the answer is no, which one goes?  Fleury’s market is certainly better than it was in the fall when teams were seeking retention plus an incentive to take on his contract.  Now, he only has one year left (though still at $7MM) and is coming off a Vezina Trophy.   As for Lehner, his track record with the Islanders and Blackhawks earned him a reasonable $5MM AAV and while he didn’t play much in 2020-21 due to injuries and Fleury’s success, he played quite well most nights.

Fleury turns 37 in November so he doesn’t have many years left in him while Lehner turns 30 this weekend so he’d be the safer long-term play but also probably has the better trade value.

Two decisions need to be made here – can they afford to keep both goalies and if not, which one goes?  The Olympic break has led to a compression of games that’s similar to what this year was so having a top tandem would give them a big leg up.  But with everything else Vegas has and needs, this may not be a luxury they can afford anymore.