The Maple Leafs didn’t do too badly last expansion draft, losing Brendan Leipsic to the Vegas Golden Knights. This year could be a little more complicated, with the team at risk of losing a more regular contributor on the back end.

The Maple Leafs are one of the teams that will have to make a fundamental decision at the beginning of their expansion preparation. Do they protect seven forwards and three defensemen, or just eight skaters? 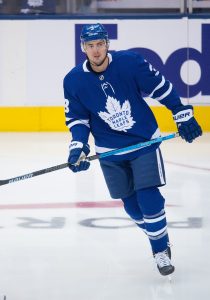 If they go the more “regular” protection method, protecting seven and three, the team would be at no risk of losing a key piece upfront. Matthews, Tavares, Marner and Nylander are going to be protected no matter what they do, but the other three slots could then be used on Kerfoot, Engvall and one of Brooks or Anderson. Even Hyman, who is an unrestricted free agent, could then be signed before the draft to use that last spot. It would give the Maple Leafs plenty of flexibility at the forward position, allowing them to start conducting business before the draft even happens.

The first problem that would present, however, is it would mean exposing Holl. Rielly, Brodie, and Muzzin are the obvious choices for protection unless the team believes that their more expensive contracts would keep them off the Seattle radar. Holl has turned into a legitimate top-four option (at least when paired with Muzzin, who does have a history of elevating his partner) and costs just $2MM against the cap through the next two seasons. That kind of value is crucial in Toronto as they continue to try and navigate the salary cap with so much money tied up by four forwards. Losing him right now would also open a huge hole on the right side, a position the Maple Leafs have had trouble filling for years.

The second problem that the seven/three structure would create is a lack of options to leave exposed at forward. Only Matthews, Tavares, Marner, Nylander, Kerfoot and Engvall meet the exposure requirements upfront, meaning at this moment, two of them need to be left unprotected. Usually, that problem can be easily fixed by signing a depth player that spent the majority of the season with the NHL club. In Toronto’s case though, most of those spots were held by veterans like Joe Thornton, Jason Spezza and Wayne Simmonds, not players who want to sign a cheap deal just to be exposed to Seattle. In fact, if the Maple Leafs are going to protect seven forwards, it would be difficult for them to meet the expansion requirements without making a trade of some kind. 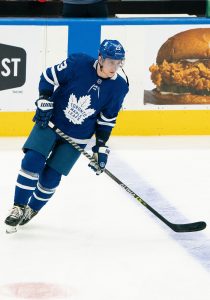 So it’s more likely that the team goes the eight-skater route, in order to protect an extra defenseman, plus the big four forwards. At that point, the decision comes whether or not Dermott, still just 24, is worth more to the organization than Holl. The restricted free agent has played 208 games for the team over the last four seasons, but seemed to be passed at the very end of the year by top prospect Sandin and has never developed into much more than a third-pairing option. That’s not to say there isn’t more potential left to unlock in Dermott, but at this point, it is hard to see how the Maple Leafs would protect him without making a separate trade.

Of course, making a trade is a very realistic scenario in this situation, given that the eight-skater route will also leave Kerfoot exposed. That helps meet Toronto’s requirements, but also could very well mean the Kraken take the 26-year-old third-line center over Dermott. At $3.5MM Kerfoot isn’t a burden on most team’s salary cap and if given the opportunity, has shown he can be a better offensive producer. Though he was stuck in a more defensive role in Toronto behind Matthews and Tavares, Kerfoot did score at least 42 points in each of his first two NHL seasons, then with the Colorado Avalanche.

Moving Kerfoot before the draft could very well be the best option for the Maple Leafs. It would open up a bit more cap space for them to do their offseason shopping, while also potentially bringing back some of the draft capital they expended at the deadline this year. It would almost certainly mean the Kraken’s focus would shift to Dermott, but as it stands, the team is going to lose one of them either way.

The eight-skater protection structure would technically mean the Maple Leafs don’t have a defenseman that meets the requirements either, but re-signing one of Bogosian, Hutton or Dermott would handle that issue. Dermott may not want to given he would know that contract could very well be going to the Kraken, but Hutton especially seems like a perfect candidate to return on a low-cost deal.

Still, it is certainly not an excellent spot for the Maple Leafs to be in, so tight against the exposure requirements. This is one of the downsides of signing so many veterans to one-year contracts but fortunately, they won’t need to go through the expansion process again (at least not for a while).