One of the mistakes that is brought up most often in regards to the Vegas expansion draft was the one made in Florida, when the Panthers sent Reilly Smith to the Golden Knights to make sure they picked Jonathan Marchessault. That’s right, the Panthers traded away one top-six player just to ensure that they would lose another and provided the Golden Knights with two-thirds of a first line in the process. The idea was to protect players like Alexander Petrovic and Mark Pysyk, certainly not a decision that is looked back on kindly. This time, new GM Bill Zito surely won’t make the same mistake.

Interestingly, the Panthers once again are faced with the decision on whether or not to use the standard seven forwards/three defenseman protection strategy. This time, it’s hard to justify going the eight-skater route, even if Yandle’s no-movement clause is going to force them to expose a valuable player from the blueline. There is just too much talent up front, and there’s no way they risk losing another Marchessault. 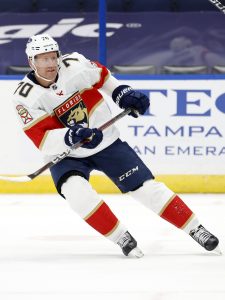 Things kick off as expected, with Huberdeau and Barkov leading the way. One has a no-move, but there’s no way either one would ever be exposed to Seattle. Beyond that though, things get a little more complicated. Verhaeghe broke out this season for 18 goals and 36 points in 43 games and will almost certainly earn protection, while trade-deadline acquisition Bennett seemed revitalized after bringing his talents to Sunrise. That’s four spots used up already, with the group of Hornqvist, Vatrano, Marchment, Acciari, and Duclair still to come. At least two of those players are going to be left unprotected, and it’s not at all clear which ones.

Hornqvist is the sort of in-your-face player that the Panthers targeted last summer, trying to add a little more bite to the lineup to compete in the playoffs. He had a good season too, scoring 32 points in 44 games, but is now 34 and costs $5.3MM in each of the next two seasons. He’s exactly the type of situation where a team might not want to lose him, yet wouldn’t be crushed if he were taken, meaning he may well be left unprotected by the Panthers.

Vatrano would have been an easy choice a few seasons ago, but recent acquisitions have dropped him further and further down the lineup. He averaged fewer than 12 minutes a night in the playoffs this season and may be deemed expendable despite scoring 18 goals in the regular season.

Marchment and Acciari are both still depth players, but the former showed an ability to move up and down the lineup while the latter is just a year removed from scoring 20 goals as a depth center. There’s a case for either one, including the fact that Marchment will cost just $800K this season and had a pair of goals in the team’s first-round exit.

Then there is Duclair, who has shown an ability to line up beside star players in the past and has excellent offensive upside. The problem is that he doesn’t have a contract yet as a restricted free agent, and could even be a non-tender candidate if the team doesn’t want to deal with a potential arbitration award. The 25-year-old Duclair also saw his role drop dramatically by the playoffs, where he failed to register a single point while averaging just over 12 minutes a night. 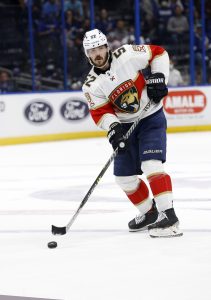 While there is a case to be made for several forwards, the defensive group seems much more straightforward, if only because of Yandle’s no-movement clause. Unless he agrees to waive it, the team will have to protect Ekblad and Weegar as the two integral cogs of their back end. The 27-year-old Weegar may still not be getting the recognition he deserves from some hockey fans, but there’s a reason why he ended up finishing eighth in Norris Trophy voting after an outstanding season. That means the Panthers will be exposing players like Gudas and Nutivaara, while not being able to protect restricted free agent Forsling either, who leapfrogged those veterans this season.

In goal, the Panthers will be forced to protect Bobrovsky, even if they probably would rather just re-sign Driedger and roll him out alongside Knight next season. There’s still five years and $50MM left on Bobrovsky’s deal, which would actually likely scare off Seattle anyway, but there’s really no need to ask him to waive the no-movement clause at this point.

The Panthers have more flexibility than most when it comes to the exposure requirements, with so many players under contract for next season. Even if Acciari or Marchment are protected, names like Hornqvist or Vatrano would also meet the requirements upfront. On the back end, even if they can convince Yandle to waive his no-move, the last protection slot would likely be used on Forsling, who doesn’t qualify for the requirement anyway. Basically, these shouldn’t be an issue for Florida no matter what they decide to do.