The Detroit Red Wings have decided the improvement the team saw under Jeff Blashill this season should continue, signing the head coach to a contract extension. General manager Steve Yzerman also announced that assistant coach Dan Bylsma will not return as he is going to pursue other opportunities in 2021-22. The team did not include details on the extension. 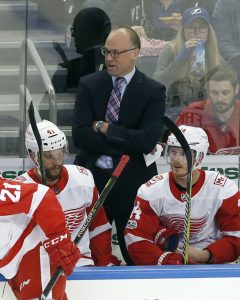 Blashill, 47, has been the head coach of the Red Wings since 2015 and with the organization since 2011. He had previously served as head coach of the AHL Grand Rapids Griffins, where he won a Calder Cup in 2013 and won the Louis A.R. Pieri Memorial Award as AHL Coach of the Year. On three occasions, USA Hockey has tabbed Blashill as the head coach for the World Championship, though he has taken home just a bronze medal during those appearances.

It doesn’t come as much of a surprise that Blashill is coming back after reports surfaced recently about contract negotiations, but it certainly won’t please every Red Wings fan. Detroit made the playoffs during his first year behind the bench but have been one of the league’s worst in the years since, finishing below the .500 mark in each of the last five seasons. Overall, Blashill has a 172-221-62 record as an NHL head coach and owns just one postseason victory.

After bottoming out in 2019-20, winning just 17 of 71 games, the team did rebound this season under Blashill’s leadership. The group was unlikely to compete for the playoffs as they continued a rebuild, but managed to climb out of the basement and finish ahead of the Columbus Blue Jackets in the Central Division. The Red Wings even had an impressive 1-0 win over the Tampa Bay Lightning late in the season and several other strong performances down the stretch. That improvement, along with the development of the young players, is likely why Blashill is coming back.

Still, given that the Red Wings haven’t quite turned the corner on their rebuild, it’s unclear if Blashill will actually be the head coach still when the team is really ready to contend.