5:15pm: The Canucks have now officially confirmed the signing, keeping Pearson under contract through the the 2023-24 season at a $3.25MM AAV. No other contract terms were reported, but Drance’s report has been reiterated my multiple other sources.

4:15pm: The Vancouver Canucks have maintained for the entire season that they would like to sign pending unrestricted free agent Tanner Pearson to an extension and that finally appears to be close to coming true. Though no formal announcement has been made yet, Thomas Drance of The Athletic has filled in all the details. The three-year contract extension will carry an average annual value of $3.25MM and is backloaded in terms of salary structure. The deal will also include a full no-trade clause in 2021-22 and a seven-team no-trade clause in 2022-23. 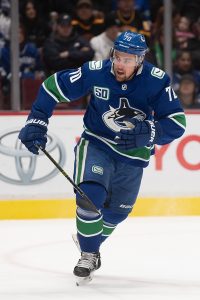 Pearson, 28, could have been a deadline chip had the Canucks not been able to work out an extension before Monday. Instead, he’ll stay with Vancouver despite some very noticeable struggles this season, earning a multi-year extension on his strong play in 2019-20. The former Los Angeles Kings forward scored 21 goals and 45 points for the Canucks last season and was a force in the playoffs, recording another four goals and eight points in 17 games.

This season hasn’t gone anywhere close to that, however, as Pearson has just six goals and 11 points in 33 games. Even his physicality has declined, with only 40 hits delivered in that time and his usual powerplay production has been almost non-existent.

Still, the Canucks obviously believe they can get the old Pearson back. Vancouver GM Jim Benning has been notorious for handing out multi-year deals to bottom-six players, but there’s no doubt that Pearson can be more than that when playing his best. The worry now will be how they go about signing their other big tickets, as both Quinn Hughes and Elias Pettersson need new deals. Vancouver has more than $64MM already committed to next season without them, not leaving a ton of wiggle room if they demand hefty raises like other restricted free agent stars have the last few years.

Elliotte Friedman of Sportsnet was first to report that the deal was coming together.