The Chicago Blackhawks have brought back a familiar face, reacquiring Vinnie Hinostroza from the Florida Panthers. In return, the Panthers will receive minor-league forward Brad Morrison. 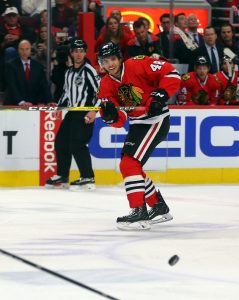 Hinostroza, 26, was drafted by the Blackhawks in 2012 and played his first 106 NHL games for the club before a trade took him to the Arizona Coyotes. He returns to the club in the midst of a brutal season for the Panthers, where he has dressed just nine times and doesn’t have a point. The undersized forward reached a career-high of 16 goals and 39 points in the 2018-19 season for the Coyotes but hasn’t been the same player since. Now on just a one-year, $1MM contract, he is a low-risk, low-reward play for the Blackhawks ten days before the deadline.

It’s low-risk because Morrison isn’t much of a prospect, despite his five points in six games so far this season for the Rockford Icehogs. He’s been up and down between the ECHL and AHL since turning pro and is a non-tender candidate when his entry-level contract expires at the end of this season.

If Hinostroza wasn’t going to play for the Panthers, they didn’t need to be carrying his $1MM cap hit on the books any longer. While Florida isn’t in desperate need of cap space and they could have freed up this amount simply by putting him on waivers and then the taxi squad, this at least gets them a closer look at Morrison down the stretch. Really, this is a deal about getting Hinostroza–a Chicago native–back where he feels most comfortable and with the management group that drafted and developed him.

He still may find himself on waivers at some point, but perhaps Hinostroza can refresh his career and find the level he had in the past. For a team still on the playoff bubble, adding some NHL-level depth is never a bad thing.