7:00 AM: The Bruins have officially announced the trade.

10:59 PM: The most talked-about rental this season has finally found a home, as the Boston Bruins turned around from their 8-1 loss this evening and will acquire Taylor Hall from the Buffalo Sabres according to Elliotte Friedman of Sportsnet. John Buccigross of ESPN was the first to suggest a deal was coming on Twitter (in quite entertaining fashion). Darren Dreger of TSN reports that the deal will be Hall and injured forward Curtis Lazar for Anders Bjork and a second-round pick. According to Pierre LeBrun of The Athletic, the Sabres have retained 50% of Hall’s $8MM cap hit through the end of this season. 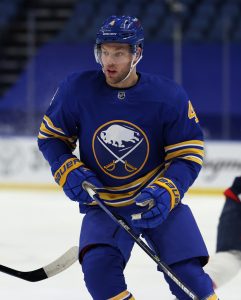 Hall had full control of this process, given he held a no-movement clause and could block a trade to any team in the league. He decided to waive that clause to go to Boston. David Pagnotta of The Fourth Period notes that the New York Islanders and Washington Capitals were also in the running earlier today. The fact that the Sabres were unable to secure a first-round pick for Hall will be the takeaway for Buffalo fans, but Hall is in the midst of a brutal season. While you can’t forget that he was the league MVP in 2018, you also can’t ignore the fact that he scored just two goals in 37 games for the Sabres this year.

Still, giving up just a second and Bjork, who has just two goals of his own this season, is a no-brainer for the Bruins, with their eyes set on postseason contention. If Hall can find any semblance of his past self in Boston he can be a difference-maker on the second line, giving the team some secondary scoring that they’ve been lacking for so long.

Bjork has established himself as an NHL player with good defensive abilities but will turn 25 later this summer and has just 39 points in 138 career regular season games. One important factor here is that he’s under contract through the 2022-23 season at a reasonable $1.6MM, but it’s not like he is going to provide a huge impact for the rebuilding Sabres. In fact, one could argue that Lazar can provide about the same value when healthy and is under contract through next season for just $800K. Moving Bjork at tomorrow’s deadline doesn’t seem out of the question if the Sabres can find an interested party.

The Bruins are also taking on $4MM in cap, which is much higher than some of the other names that have been moved around recently. The fact that they can absorb that hit is why Hall’s price is so low, as they did not need to involve another team, which would have meant giving up another asset. Even without going into long-term injured reserve, the Bruins should have just enough room to fit Hall in after sending Bjork the other way.

At the end of the day, this deal will mean nothing for Boston if Hall can’t find his form. The team has taken swings on high profile wingers before and had them struggle down the stretch, but Hall will certainly be surrounded by more talent in his new locker room. In all likelihood, the 29-year-old winger will get just his third chance at the postseason this year, though it isn’t even a guarantee at this point. Boston is now just four points ahead of the Philadelphia Flyers and New York Rangers for fourth place in the East Division (though they do have two games in hand), meaning Hall will need to start contributing right away if he wants to get another taste of the playoffs.