Colorado has been in need of a veteran backup goalie for most of the season and they have found one as they have acquired Devan Dubnyk from San Jose in exchange for defenseman Greg Pateryn and a 2021 fifth-round pick.  Both teams have confirmed the deal.  Sharks GM Doug Wilson released the following statement on the move:

Devan brought the element of consummate professionalism and class to our dressing room, in what has been an extremely unique and challenging season. He fit seamlessly within our group and helped mentor many of our younger players. We thank him for his contributions to our club on and off the ice this season and wish him the best in Colorado.

The 34-year-old netminder was in his first season with the Sharks following an offseason trade from Minnesota that San Jose was hoping would help him rediscover his form from a few years ago.  However, that didn’t happen as Dubnyk has posted a 3.18 GAA with a save percentage of just .898, numbers that weren’t much better than his final year with the Wild. 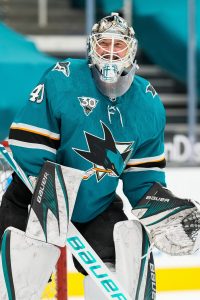 Nevertheless, the move to bring Dubnyk in makes sense from the perspective of the Avs.  Pavel Francouz has been injured all season long, forcing Philipp Grubuaer to play the overwhelming majority of the games so far and while he has played great, there is the risk of burning him out if that was to continue down the stretch.  Jonas Johansson was brought in last month to try to help and while he’s coming off a shutout last night, he clearly wasn’t the solution for the rest of the season.  Dubnyk should be able to play a bit more often over the final month to help keep Grubauer fresh with the cost of adding that insurance being relatively low.

Pateryn is on the move for the second time this season after being acquired early in the year for Ian Cole in a move designed to give them a bit of cap flexibility and a spot for Bowen Byram.  His inclusion is primarily for cap-matching purposes as his $2.25MM AAV is slightly higher than Dubnyk’s $2.167MM price tag (Minnesota is paying the other half of that from the offseason trade).  As a result, Peter Baugh of The Athletic relays (Twitter link) that there is no salary retention in the deal.  Pateryn has split the season between the NHL, AHL, and taxi squad and will likely have a similar role as a depth blueliner or taxi squad piece for San Jose.

The move frees up a roster spot for either Alexei Melnichuk or Josef Korenar to join San Jose’s roster for the stretch run.  Both youngsters could be part of the plan as soon as next season so the chance to evaluate one or both of them in NHL action will be beneficial.  Meanwhile, Colorado GM Joe Sakic has now added veteran depth for the second time in as many days following yesterday’s acquisition of Patrik Nemeth from Detroit to supplement their roster for what they hope is a long playoff run.

Kevin Weekes of the NHL Network was the first to report that Dubnyk was going to Colorado while Sportsnet’s Elliotte Friedman first noted the fifth-round pick going to San Jose.