On Monday, Edmonton Oilers head coach Dave Tippett told reporters including Ryan Rishaug of TSN it was an “understatement” that the team wanted to see Zack Kassian get “a bit more engaged” in games this season. The physical forward had just two minor penalties heading into last night’s game but quickly proved to his coach and teammates that he was still willing to drop the mitts. Kassian fought Erik Gudbranson less than two minutes into the game and the team would go on to win 3-1, but Kassian wouldn’t see the ice again. 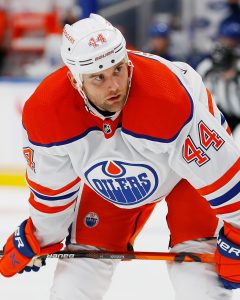 Leaving after the fight, Kassian played just 33 seconds and this morning Tippett said he would not play in the rematch tonight. The coach described his absence as week-to-week, though he is still undergoing further evaluation. Meanwhile, CapFriendly reports that Kassian has been placed on long-term injured reserve today thanks to some cap gymnastics the Oilers needed to perform, meaning he’ll miss at least ten games.

Kassian did have 29 hits in 12 games before last night, but had scored just a single goal and registered just three points. That isn’t good enough for a player who received another early chance to line up next to Connor McDavid and his ice time had been slashed heavily in recent games because of it. That means his absence won’t be too noticeable, but it does just test the Oilers’ depth even further. The team has recalled Devin Shore from the taxi squad in the meantime.