Ryan Dzingel is on his way back to Ottawa as the Senators have acquired the winger from Carolina in exchange for center Cedric Paquette and winger Alex Galchenyuk.  Both teams have announced the deal which carries no salary cap retention on any of the players.

Dzingel was a bit part of Ottawa’s lineup just a few years ago, notching over 20 goals in both 2017-18 and 2018-19.  However, the 28-year-old has struggled considerably since then between his stints in Columbus as a trade deadline acquisition and Carolina, who signed him back in 2019.  This season, Dzingel has two goals and two assists in 11 games while averaging just 13:12 per night, his lowest ATOI since his rookie season.  He carries a $3.75MM cap hit this season with a $3.5MM salary. 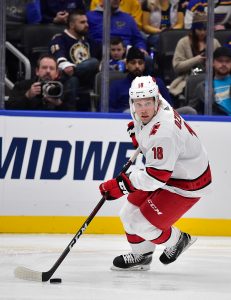 Paquette was brought in as part of a cap-clearing move from Tampa Bay that also saw the Sens add defenseman Braydon Coburn and a second-round pick for injured winger Marian Gaborik and goalie Anders Nilsson who both went straight to LTIR.  While he was an effective fourth liner with the Lightning, that hasn’t been the case in Ottawa and the 27-year-old has been a frequent healthy scratch while barely averaging 10 minutes a game when he was in the lineup.  Paquette has a salary and AAV of $1.65MM.

As for Galchenyuk, it has not been a fun season.  The 27-year-old seemed like a low-risk, medium-reward acquisition in free agency when he signed a one-year, $1.05MM deal but he also has been a frequent scratch with Ottawa and has just one goal in eight games this season.  He’s still only two seasons removed from a 41-point season in Arizona (and three years removed from a 51-point campaign with Montreal) but he struggled considerably last season and is off to a worse start this year.  He’s now joining his fifth different team in less than three years.

It’s a low-risk deal for both teams as all three players are set to be unrestricted free agents at the end of the season.  If they rebound with their new teams, it’ll work out well and if they don’t, none were particularly irreplaceable where they were.  From Ottawa’s standpoint, they get a player who was effective for them not that long ago and free up a roster spot for another young player while for Carolina, they save some money and add a capable energy player in Paquette and an offensive wild card in Galchenyuk who they hope will be able to fill the role they envisioned for Dzingel, just at a lower price tag.

Sportsnet’s Elliotte Friedman first reported that Dzingel was on his way to Ottawa with Paquette in the deal while TSN’s Frank Seravalli was the first to report Galchenyuk’s inclusion in the swap.