It turns out that Corey Crawford’s indefinite personal leave of absence will be a permanent one as the veteran netminder has decided to retire, as announced by the NHLPA.  He released the following statement:

I have been fortunate to have had a long career playing professional hockey for a living. I wanted to continue my career, but believe I’ve given all I can to the game of hockey, and I have decided that it is time to retire. I would like to thank the New Jersey Devils organization for understanding and supporting my decision. I would like to thank the Chicago Blackhawks organization for giving me the chance to live my childhood dream. I am proud to have been part of winning two Stanley Cups in Chicago. Thank you to all of my teammates and coaches throughout the years. Also, thank you to the fans who make this great game what it is. I am happy and excited to move on to the next chapter of my life with my family.

The 36-year-old was unable to come to terms on an agreement with Chicago over the offseason and hit the open market.  He was able to secure the multi-year deal he had been seeking from the Blackhawks with New Jersey as they gave him a two-year, $7.8MM contract to serve as a veteran mentor and platoon partner for youngster Mackenzie Blackwood.  After putting up a 2.77 GAA with a .917 SV% in 40 games last season, it seemed like a good fit for both sides. 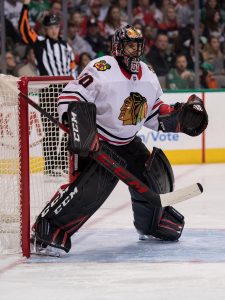 Instead, Crawford will retire without ever officially suiting up for New Jersey.  His playing days come to an end with 488 career NHL games under his belt – all with Chicago over parts of 13 seasons.  He worked his way up the depth chart, eventually beginning as a minor-league option and working his way up to the number one role.  He’ll hang up his skates with a 260-162-53 record with a 2.45 GAA, .918 SV%, and 26 shutouts along with a pair of Stanley Cup titles in 2013 and 2015.

New Jersey will now be faced with a challenge as they look to fill their backup spot on short notice.  Jimmy Howard is the top unrestricted free agent still available but he is coming off a season to forget with Detroit.  At this point, their best bet may be to wait for teams to make their surplus netminders available on waivers over the next couple of days and take their pick from there.  While Scott Wedgewood has some NHL experience and could conceivably begin the year as Blackwood’s backup, it seems all but a certainty that GM Tom Fitzgerald will look to add another goalie in the coming days.

While the contract is technically a 35-plus contract, the new CBA MOU provisions allow for the cap hit to not count against the books as long as it’s a back-loaded or evenly-distributed deal and doesn’t contain signing bonuses beyond the first year.  As that is the case for Crawford, New Jersey won’t face any lingering cap penalty.

Radio-Canada’s Martin Leclerc was the first to report that Crawford would be retiring.