A few months ago, Colin Wilson released a long, emotional piece in The Players’ Tribune, detailing his battle with addiction and a recent diagnosis of obsessive-compulsive disorder (OCD). It was a brutally honest look at the mental health struggles of many athletes and ended with this: 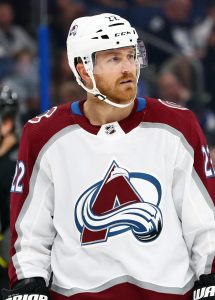 And like I said, I don’t know if I’ll be back out on the ice anytime soon. But I know that, no matter what the future holds for me, I did it. I played in the NHL. I lived my dream. And I fought through hell to make a career for myself. My name might not be on the Stanley Cup, and that’s fine. Because I know there is an opportunity ahead of me to not just leave my mark on the game of hockey, but also on lives all across the world.

I don’t want to pretend like I have it all figured out, because I don’t. I’m still learning as I go. But what I do know comes from what I went through. So if you’re going through it, remember this:

Be kind to yourself, to your mind.

Have patience with your soul, your body.

And know that you don’t have to do it alone.

Today, he has at least figured out what the future will not hold. Wilson has retired after 11 NHL seasons, explaining that though it is a bittersweet moment to leave hockey behind, he’s excited for what will come next in his life.

Originally selected seventh overall by the Nashville Predators in 2008, Wilson made it to the NHL by the 2009-10 season and never looked back. A solid middle-six contributor, he reached a career-high of 20 goals and 42 points in 2014-15. In 632 career games, he scored 286 points, helping his team reach the playoffs on eight different occasions.

Though his career likely didn’t burn as bright as some expected after his dominant performances at Boston University, Wilson can still say he was a very good NHL player. Wish him well in the next chapter of his life and hope that the honesty he showed in October can continue to guide him.