2020 has certainly been a unique year away from the rink.  However, it’s also a year that has featured several big trades and free agent signings, coaching changes, and much more.  Over the coming days, PHR will take a look back at the top stories from around the game on a month-by-month basis.  We continue with a look back at February.

Byfuglien Situation Explained: The Winnipeg Jets spent a good chunk of their season in confusion at the sudden announcement during training camp that star defenseman Dustin Byfuglien was taking a leave of absence with little to no explanation. That decision prompted the team to suspend Byfuglien, then he countered with a grievance through the NHLPA. The blueliner also underwent ankle surgery shortly after the season began. However, after months of waiting, the team got some clarification regarding Byfuglien as it was reported that Byfuglien has not even skated as of Feb. 1 and he wasn’t expected to return at all during the season. Suddenly two days later, it was reported that the Jets and Byfuglien were discussing a mutual contract termination. That led to trade rumors with the Jets trying to move Byfuglien at the trade deadline. Of course the saga continued for several more months, but February was the first month where it became quite clear that the Jets not only weren’t getting Byfuglien back any time soon, but the two parties’ were headed for a divorce.

Major Injuries: As February rolled on, injuries became a major notation in the season as many teams lost key players for significant times and many for the season (had the playoffs not been delayed until August due to COVID-19). The Sharks were the first to announce that Tomas Hertl was out for the season, a big blow for the struggling Sharks. Next, Chicago’s Brent Seabrook underwent his third surgery, followed by Seth Jones, who was expected to be out indefinitely, a major loss for the defensive Blue Jackets. Of course, the suspension of play did allow Jones to return for the playoffs. The injuries continued to pile up, including San Jose’s Erik Karlsson, Vancouver’s Brock Boeser, Toronto’s Andreas Johnsson, Winnipeg’s Brian Little and Montreal’s Shea Weber. Some were able to return for the playoffs, but those injuries crippled several teams.

Paul Maurice Extended: Despite the team’s struggles and even some light rumors that the Winnipeg Jets might consider a coaching change, the Winnipeg Jets instead signed head coach Paul Maurice to a three-year extension, who has been leading the squad since 2013. While Maurice hasn’t been able to get the Jets deep into the playoffs and the team has seen quite a few early-round exits over the years, the veteran coach has helped the Jets post impressive numbers over the years. Maurice had tallied a 264-186-53 record at the time of the extension and had kept Winnipeg above water last season despite the depletion of their defense. 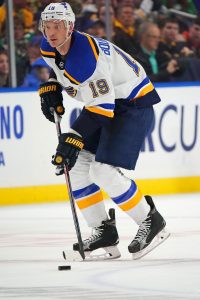 Bouwmeester collapes: The St. Louis Blues suffered a shock when veteran defenseman Jay Bouwmeester suffered a cardiac event while sitting on the bench during a game against the Anaheim Ducks on Feb. 11. He collapsed behind the bench and trainers and physicians rushed to his aid and saved his life and was later taken the the hospital. He was doing “very well” the following day and underwent successful surgery two days after that. He was labeled out for the season and the playoffs two weeks later. His playing career looks to be over, but the 37-year-old is doing well.

Trade Deadline: The trade deadline came and went with dozens of trades that filled the transaction wires. While many significant names passed throughout the month, perhaps the most significant trades were made by the Tampa Bay Lightning (hint: the eventual Stanley Cup Champions). The Lightning traded for New Jersey Devils power forward Blake Coleman, giving up prospect Nolan Foote and Vancouver’s 2020 first-round pick. A week later, the Lightning were at it again, acquiring another physical forward, Barclay Goodrow, in exchange for their own 2020 first-rounder. While Tampa Bay was the obvious winner, many significant names changed hands, including Robin Lehner, Nick Cousins and Alec Martinez (to Vegas); Tyler Toffoli (to Vancouver); Ondrej Kase and Nick Ritchie (to Boston); Jean-Gabriel Pageau and Andy Greene (to New York Islanders); Tyler Ennis, Andreas Athanasiou and Mike Green (to Edmonton); Brendan Dillon and Ilya Kovalchuk (to Washington) amongst many other significant deals.