Philadelphia Flyers forward Nolan Patrick has accepted his qualifying offer of $874,125 according to PuckPedia, meaning he will sign a one-year contract for the total. Patrick was a restricted free agent without arbitration rights and could not sign an offer sheet, essentially taking any leverage he had away. 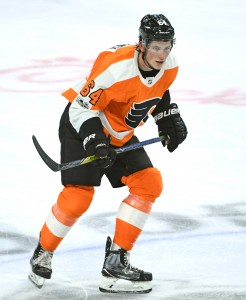 That’s not to say Patrick really could have demanded much more, even though he did find some success as a young player. The 22-year-old missed the entire 2019-20 season with a migraine disorder, one that the Flyers supported him throughout. He’s been back skating for months and is hopeful to be ready for the start of the season, but until that actually happens it is impossible to tell how he will respond.

A one-year deal at the reduced salary was the obvious choice for the Flyers, who still don’t exactly know what they have in Patrick. Selected second overall in 2017 behind New Jersey’s Nico Hischier, the big WHL forward scored 13 goals in each of his first two NHL seasons. While that wasn’t an outstanding total for such a highly drafted prospect, it also proved he could handle himself at the NHL level and established himself as a core piece in Philadelphia.

Now, more than a year and a half removed from his last NHL game, Patrick will have to re-establish himself completely and prove he can still be that core piece that the team believed in. He’ll be a restricted free agent again next offseason.