The Toronto Maple Leafs have signed Joe Thornton to a one-year contract worth the league minimum of $700K. The deal does not include any performance bonuses but Pierre LeBrun of The Athletic does confirm that it includes a no-movement clause.

It’s been a long courtship of Thornton in Toronto. The team made a real pitch to bring him to the Maple Leafs back in 2017 alongside former teammate Patrick Marleau, but the San Jose Sharks legend returned to California instead. Three years later and the team has landed their man, though he certainly won’t be a centerpiece of the roster this time around. 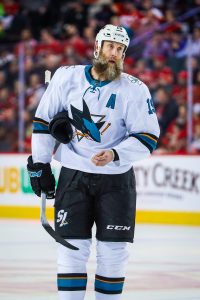 Now 41, there’s no question that Thornton isn’t the player that won the Hart Trophy in 2006 or even the one that scored 51 points in 2018-19. He had just seven goals and 31 points last season for the Sharks, his lowest total since a 1997-98 rookie campaign. But Toronto isn’t bringing in Thornton to be the focus of the offense, but a veteran leader to add another voice in the dressing room and a little more responsibility on the bench.

If there is anyone who can understand the pain of failing playoff expectations, it’s Thornton. After 1,636 regular season games and 179 more playoff contests, the future Hall of Famer forward has still not sipped from Lord Stanley’s Cup. Ninth all-time in games played, seventh in assists, and 14th in points, Thornton will be joining only the third NHL team of his long career.

Currently playing in Switzerland for the club team in his offseason home, Thornton’s fit in Toronto isn’t even exactly clear at this point. The team already re-signed Jason Spezza to serve on the fourth line and brought in names like Wayne Simmonds, Jimmy Vesey and Travis Boyd to battle for spots in the bottom-six. If Thornton is to be penciled into that group, it seems likely that there could be another body—perhaps Pierre Engvall, who is still waiver-exempt—headed back to the minor leagues.

The Maple Leafs also still need to sign arbitration-eligible Ilya Mikheyev, who has a hearing later this month, as well as restricted free agent defenseman, Travis Dermott. All that without any actual cap space, though every time they add a $700K forward they can theoretically add some cap space by sending someone else down or trading them to another team.

There’s likely still more maneuvering for GM Kyle Dubas, but the Maple Leafs have landed one of their targets. Whether that target has any game left is still to be seen.