The Winnipeg Jets are bringing one of their hometown kids back to Manitoba. Cody Eakin has been acquired from the Vegas Golden Knights in exchange for a conditional 2021 fourth-round pick. Eakin is on the final season of a four-year $15.4MM contract and set to become an unrestricted free agent in July. The pick can become a 2021 third-round selection if the Jets make the playoffs or Eakin re-signs. Vegas will not retain any salary in the transaction. 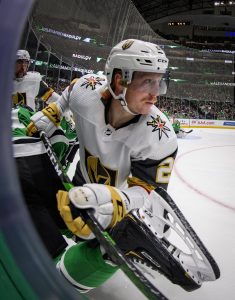 Apparently, the Jets have decided not to follow in their yearly tradition of spending a first-round pick on a rental second-line center at the deadline. After acquiring Paul Stastny in 2018 and Kevin Hayes in 2019, Eakin comes this season to try and give them a little more depth at the position for a playoff push, even if he won’t be expected to serve in the same top-six role.

The 28-year old has shown he can perform offensively in the past, even as recently as the 2018-19 season when he scored 22 goals and 41 points for the Golden Knights. But that Eakin has been nowhere to be seen this year as his four goals and ten points match Adam Lowry’s disappointing totals for the season. Interestingly, Eakin and Lowry were teammates for a while with the Swift Current Broncos of the WHL and will get a chance to reunite in the Jets’ bottom-six down the stretch.

For the Golden Knights getting rid of Eakin’s contract was likely reward enough, making the conditional pick icing on the cake. The team wasn’t getting any production from the former Dallas Stars forward and needed room if they are going to activate Alex Tuch before the end of the year or make another acquisition. Nicolas Roy can slide into the lineup on a regular basis for the time being, while they grab another piece of draft capital to use in other discussions.

The Jets have assigned Andrei Chibisov to the minor leagues to make room on the roster.