The Ottawa Senators have traded Dylan DeMelo to the Winnipeg Jets in exchange for a 2020 third-round draft pick. This begins the selling season for the Senators, who are expected to move several players before the upcoming deadline. Winnipeg immediately moved Luca Sbisa to injured reserve, while Ottawa recalled Andreas Englund. 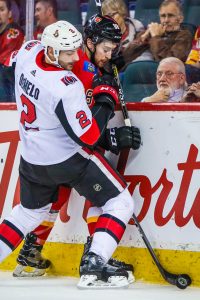 After the New York Islanders spent a second-round selection to acquire Andy Greene recently, the market for rental defensemen seemed to be set fairly high. That bar won’t be hit by the Senators who have settled for a lower pick, though they’ll happily add it to a huge number of selections they have over the next two years.

DeMelo is likely also just the first name that Ottawa will move this month. Mikkel Boedker, Vladislav Namestnikov, Jean-Gabriel Pageau, Tyler Ennis, Ron Hainsey, Mark Borowiecki and Craig Anderson are all set to become unrestricted free agents at the end of the year, while younger players like Chris Tierney, Connor Brown and Anthony Duclair are all pending restricted free agents that could bring back value as well. That’s a ton of options for GM Pierre Dorion to move, though the team does need someone to keep playing for them down the stretch.

The 26-year old DeMelo is actually quite a shrewd pickup for the Jets, who have had trouble finding much stability on the blueline all season. The former San Jose Sharks defenseman carries just a $900K cap hit on his expiring deal and has actually been excellent for the Senators. With ten points in 49 games he isn’t going to light up the scoresheet on a regular basis, but DeMelo consistently recovers pucks in his own end and sends play the other way. His versatility will come in handy for a Jets team trying to scrape their way into the playoffs, and a third-round pick is a more than reasonable return for GM Kevin Cheveldayoff to give up.

If the Jets decide to try and re-sign DeMelo, it would be the first time this season that he receives a contract offer. Pierre LeBrun of The Athletic reports that though the defenseman’s representatives did discuss an extension with the Senators, they never received an official offer.