2:36pm: Another defenseman on an expiring contract was dealt today in Dylan DeMelo, and his former partner may be next. Brenden Dillon is on the trade market in San Jose, and according to Frank Seravalli of TSN the Vegas Golden Knights, Washington Capitals, Boston Bruins and St. Louis Blues have shown interest. 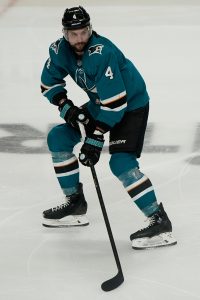 David Schoen of the Las Vegas Review Journal tweets that the Sharks are looking for a second-round pick and a prospect for Dillon, though it’s unclear how the return of DeMelo may affect that ask. The Ottawa Senators received just a third-round selection for their own rental, while the New Jersey Devils received a second for Andy Greene.

Dillon, 29, became emotional when he was recently asked about the possibility of a trade and is almost undoubtedly moved by the deadline. He is a physical defenseman that can move the puck well enough to be a contributor on any contender, and has 60 games of playoff experience with the Sharks over the last four seasons. All four of those teams referenced have their eyes not only on the playoffs but a long run once they get there, something that always requires more defensemen than you expect.

Unlike DeMelo however, Dillon comes with a cap hit of $3.27MM which makes him a more complicated move. For many of the contenders pushed right up against the cap they’ll need San Jose to retain some of the salary, only increasing the return.