The nightmare season in San Jose just continues to get worse.   Already down two key forwards in Logan Couture and Tomas Hertl while being well out of playoff contention, the Sharks announced that defenseman Erik Karlsson will miss the remainder of the season due to a broken thumb on his left hand that will require surgery.  He is expected to be fully recovered in time for training camp. 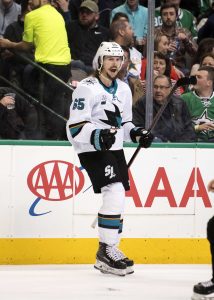 Karlsson’s second season in San Jose has not gone as well as anyone had hoped following him signing a record-setting eight-year, $92MM deal to avoid free agency back in June, the richest contract given to a defenseman in NHL history.  After seeing his production dip to 45 points last season (albeit in 53 games), his lowest since he recorded 45 in his sophomore year in Ottawa back in 2010-11, his output went a bit lower this year as he picked up six goals and 34 assists in 56 games this season.  After being one of the top goal scoring threats from the back end in his prime with the Senators, he will now have gone three straight years where he scored less than ten times.

To make matters worse for the Sharks, they don’t have their first-round pick this season as it was dealt without any sort of trade protection as part of the trade to land Karlsson back in 2018.  Losing Karlsson, despite his struggles, is a huge blow for their back end, a group that is likely to be weakened even further when Brenden Dillon is inevitably dealt between now and the February 24th trade deadline.

Taking Karlsson’s place on the roster will be defenseman Jacob Middleton who has been recalled from the AHL’s San Jose Barracuda.  The 24-year-old has played in four games with the Sharks this season and has been held off the scoresheet while chipping in with a goal and five assists in 31 games at the minor league level.

Scott Bair of NBC Sports Bay Area was the first to report that Karlsson was out for the season.